Hospital says it will be diverting trauma patients elsewhere 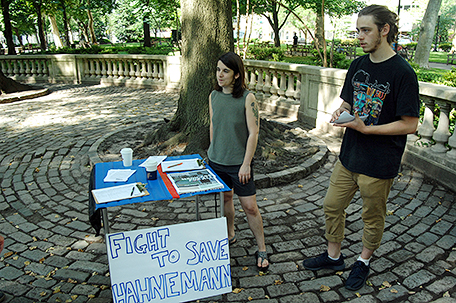 A Philadelphia hospital that earlier announced plans to close this fall has given notice that it will immediately begin diverting trauma victims to other facilities despite a state warning against taking steps toward closure.

Hahnemann University Hospital said Saturday that it notified the Pennsylvania Trauma Systems Foundation Friday night that it was “de-designating” as a Level 1 and 2 trauma facility, effective immediately.

“After reviewing our plan of closure and in consultation with the Pennsylvania Department of Health, we felt this move is in the best interest of patient safety,” he said. Officials said the emergency department will remain open but won’t accept trauma patients.

The 495-bed hospital announced Wednesday it would close in September due to unsustainable financial losses. Ron Dreskin, interim chief executive officer of hospital owner Philadelphia Academic Health System, said in Saturday’s announcement that officials realize the impact the move and the closure would have on the city and surrounding neighborhoods “and most importantly, our staff.”

“We wish there could have been a more positive outcome for all,” he said. “In spite of our best efforts and meetings with numerous city, state, union, insurance carrier and university officials, a financial solution could not be achieved.”

State health officials on Thursday warned the hospital’s owners against taking the first steps toward closing, saying they must first file a detailed plan that ensures the safety of people who depend on the institution for care. The cease-and-desist order cited special concerns about closure of any part of the facility before July 4 due to the annual holiday celebration, concert and fireworks on the parkway that draws tens of thousands of residents and tourists.

The Philadelphia Inquirer reported that city officials also cited the July 4 event in an emergency petition to join a suit by Drexel University College of Medicine, which has been affiliated with Hahnemann as a teaching hospital and sought a preliminary injunction to block the closure. “Hahnemann, which is located only six blocks from 21st and the Benjamin Franklin Parkway, is by far the closest emergency care facility to the parkway event,” the petition said, citing risk to those attending should Hahnemann’s emergency care facilities not be available.