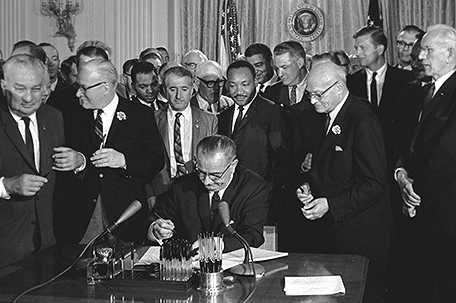 ABOVE PHOTO:  President Lyndon B. Johnson signs the 1964 Civil Rights Act as Martin Luther King, Jr., and others, look on.

August 6 marked the 52nd anniversary of the signing of the Voting Rights Act, one of the most significant achievements of the Civil Rights Movement.

The law took a landmark step to protect and ensure our right to vote, but our work on the state and federal levels to ensure voting rights continues to this day. We are still taking steps to improve voter access on the state level.

The measures address the following: