Honoring the Sound Of Philadelphia 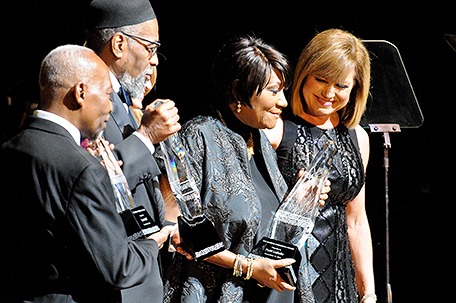 During Tuesday night’s Marian Anderson Awards, three of Philadelphia’s musical icons —  singer Patti LaBelle and songwriters Kenny Gamble and Leon Huff — were honored for their achievements both on and off the stage.

The “Soul Train” pulled into Verizon Hall at the Kimmel Center for the Performing Arts Tuesday night to celebrate the accomplishments of Patti LaBelle, Kenny Gamble and Leon Huff at the Marian Anderson Foundation’s annual gala.

The gala is a benefit for the Marian Anderson Foundation and funds the Young Artists Study Grant Program, which provides financial assistance to talented high school-aged musicians in need of financial assistance. Since 1998, the foundation has provided $600,000 worth of assistance to artists, free public arts programs and commissioned works, said Nina Tinari-Schulson, chair of the foundation’s board of directors.

Highlighting the evening is the presentation of the Marian Anderson Award, which is given to accomplished artists who have also tried to make a difference in their communities and the world. It is named to honor the Philadelphia-born contralto who performed during what became an iconic concert on the steps of the Lincoln Memorial in Washington D.C. after the Daughters of the American Revolution barred her from performing at Constitution Hall due to her race. Anderson went on to perform with the Metropolitan Opera.

LaBelle was honored for her work in fighting breast cancer and diabetes while Gamble and Huff were honored for their education and urban development efforts. Past recipients of the award include the late Maya Angelou, jazz musician Wynton Marsalis, and actors Richard Gere, Ruby Dee and Ozzie Davis. 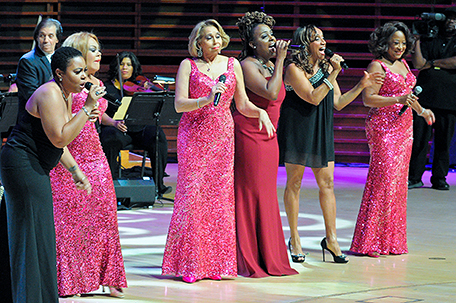 In an acceptance speech that combined humor, a little nervousness, and the trademark sassiness commonly associated with her, LaBelle thanked the foundation for the honor while simultaneously challenging herself to live up to the ideas of her fellow Philadelphians.

“Thank you for recognizing me with this prestigious honor named after a phenomenal woman and trailblazer, Marian Anderson,” she said. “I am truly blessed and I hope that I can continue to live up to what the Marian Anderson Award means and the legacy that she created.”

In accepting their awards, Gamble and Huff reminisced about a Philadelphia music scene that encouraged their creativity and helped craft the message of love that went through their music.

While the circumstances that they found themselves in weren’t always idea, and many people in the music business counted them out, they went on to become Rock and Roll Hall of Famers and musical icons.

Inspiring the next generation is the most important thing, Gamble said.

“I pray that we can be an example to all of the we can all serve as an example to the young songwriters and musicians to never give up,” Gamble said. “Just keep on rising to the top. Keep going. And try to be an asset to our community and our society.” 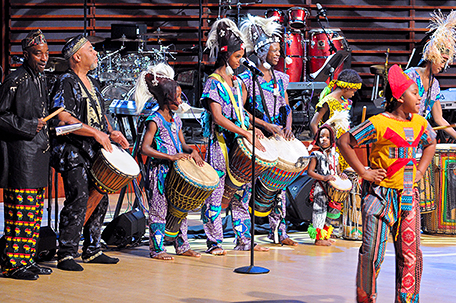 Prior to being presented the awards, host Monica Malpass, co-anchor of 6ABC’s “Action News at 5” served as a guide through a stellar concert that included Ledesi, The Three Degrees, the Soul Survivors, Kathy Sledge, and Carol Riddick. All of the groups performed various Gamble and Huff hits like “When Will I See You Again?”, Expressway to Your Heart”, “We Are Family”, and other clasics.

The singers also gave a surprise performance of LaBelle’s hit “Lady Marmalade” that brought the crowd to it’s feet. 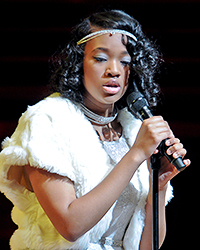 Two of the evening’s best performances came from young people. The concert began with Universal’s Africa Dance and Drum Ensemble marching on the stage and sharing everything from drums and dancing to stilt walkers.

Also Aliyah Khaylyn, a Marian Anderson Grant supporter, performed LaBelle’s arrangement of “Somewhere Over The Rainbow” as a tribute.