Honoring The “Lion of Zion” 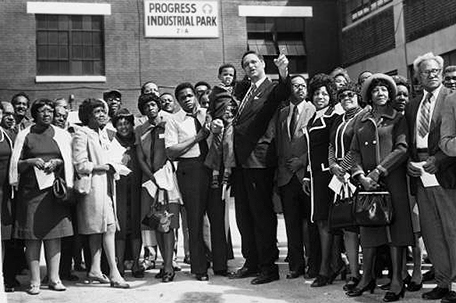 To get an idea of why the late Rev. Leon Sullivan was so important to the fabric of Philadelphia overall, and the city’s Black community in particular, one need go no further than Temple University’s main campus.

Next to the university’s new dormitory is Progress Plaza. The strip shopping center, which opened in 1968, is the first Black-owned shopping center in the United States. It was built using labor trained in Sullivan’s Opportunities Industrialization Center’s programs and signified a commitment to the development of Black-owned businesses through entrepreneurial training programs.

But while many of us pass by Progress Plaza every day, the story of its inception has been lost to history, said Michael Rashid, a member of the Philadelphia Community of Leaders.

“The young people that interact with us don’t know about Rev. Sullivan,” he said. “They’re not being taught about people like him and Cecil B. Moore in school.”

That is one of the motivations for the Philadelphia Community of Leaders’ Honoring The Ancestors tribute to Rev. Sullivan. The annual event, which will be held from 3PM to 6PM on Sunday at the African American Museum in Philadelphia, 701 Arch St., will spotlight Sullivan’s achievements and introduce him to a new generation, Rashid said. 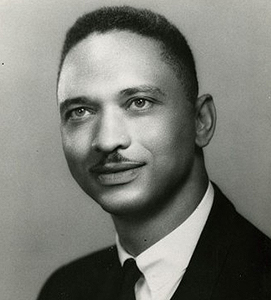 “One of the things that we wanted to do with the “Honoring the Ancestors” event was to help our young people learn more about him,” he said. “Rev. Sullivan did a lot of great things here in Philadelphia, nationally and internationally. We’re hoping that this will satisfy a need for knowledge that’s been exposed to us by our young people.”

The event will also serve as the introduction of PCOL’s new Buy Black discount card. This card, which will be connected to the “Buy Black” app, connects consumers and Black-owned businesses. About 200 businesses have signed up to be a part of the program, and PCOL has partnered with a variety of entities including 900 AM WURD, The Black Professionals News and Enon Baptist Church to get the word out about the new card.

Businesses who support Black-owned businesses are invited to sign up to be a part of the discount program, Rashid said.

In addition to financing PCOL’s cultural programs, such as the upcoming reboot of the Black Family Reunion, the discount cards will give the community a sense of empowerment through economics. 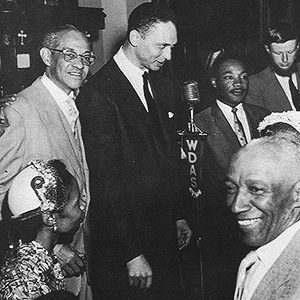 Rev. Leon Sullivan, pastor of the Zion Baptist Church, (at microphone) one of the largest Negro churches in Philadelphia, utilizes the facilities of station WDAS in a program originating from his church in 1959. From left to right are Judge Raymond Pace Alexander of the Philadelphia courts and Rev. Martin Luther King Jr. (Photo: WDAS)

That PCOL chose to unveil the app and the discount card at an event honoring someone who believed in Black empowerment through economics was no accident, Rashid said.

“There is a connection with Rev. Sullivan and what he did,” Rashid said. “It’s a continuation of what he and others thought about and acted upon in the 60s and 70s.”

In addition to hearing from some of Rev. Sullivan’s contemporaries and an African Drum performance, the Philadelphia Community of Leaders will be honoring Evelyn F. Smalls, President and CEO of United Bank of Philadelphia for her leadership of one of the nation’s first Black-owned banks, Rashid said.

If you’d like to come to the Second Annual Honoring The Ancestors event, please RSVP through the Philadelphia Community of Leaders website at philadelphiacommunityofleaders.org. The event is free and open to the public.

To get the Buy Black app, or to sign up to be a participating business in the program, go to www.buyblackapp.net.

Smooth Traveler: A lion in winter