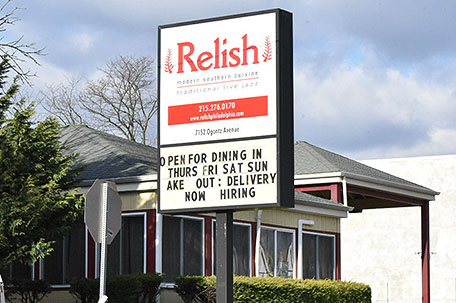 Relish, a West Oak Lane gathering place for everyone from powerbrokers to people having a date night, closes Sunday. But the building probably won’t be empty long.

Usually, if you’re looking for someone in Philadelphia’s political class on Election Day, you go to the Relish restaurant at 7152 Ogontz Avenue.

From 11 a.m.-2 p.m., politicians, poll workers, committee people and other members of Philadelphia’s political class would pile into the restaurant for cornbread, fried chicken, collard greens or pasta cooked to order and a glass of iced tea while connecting with each other to go over the events of the day.

When it wasn’t Election Day, Relish was a place where one might take someone for a date night. The restaurant featured karaoke nights and live jazz along with such dishes as Southern fried catfish with lobster remoulade, shrimp and grits, hot fried chicken with honey and an Uncle Nearest sour to wash it all down.

While the tradition will probably continue, it will have to continue somewhere else.

On Sunday, Relish will serve its final meals before closing its doors for good. In a statement released last week by Robert and Benjamin Bynum Jr., the restaurant’s proprietors, said running the restaurant had become too much.

“The last several years have been a tremendous challenge,” according to the statement. “We are deeply grateful to the commitment and dedication demonstrated by our staff, some of whom have been with us since the very beginning. That same gratitude must be extended to our guests, without whom none of this would have been possible.”

In an interview with the Philadelphia Inquirer, Benjamin Bynum Jr. said the closing was also a “lifestyle decision,” and that COVID, and the lockdown connected to it, gave them a chance to make.

Like many restaurants during the COVID pandemic, Relish has had to make adjustments to be successful. One of those adjustments was closing its “all-you-can-eat buffet,” which never reopened.

The popular restaurant opened 15 years ago with help from the Ogontz Avenue Revitalization Corporation (OARC), which was founded by now U.S. Rep. Dwight Evans (D-3rd Dist.). It was backed by a $650,000 loan from the Philadelphia Industrial Development Corporation and a $470,000 grant from the Department of Community and Economic Development.

It is an investment that has paid dividends to the Ogontz Avenue business corridor, said Kimberly A. Lloyd, OARC’s president and CEO. Relish’s popularity gave the entire area a boost, she said.

“In the last decade or so, the vibrancy of Ogontz Avenue has only increased because of the presence that Relish brought,” Lloyd said. “So, we feel really good that the commercial corridor is going to maintain its vibrancy.”

While Relish had been one of the longer standing tenants of the building it occupied — over the last 40 years, the location has housed various restaurants including the Hard-Shell Café, the Ogontz Grille, Sadiki’s and the Old Country Buffet — since it and its liquor license are owned by OARC, the announcement of Relish’s closing has brought out some serious interest, Lloyd said.

“We have quite a few individuals and corporations and partnerships interested in the building,” Lloyd said. “So, we intend to keep it as a family-style restaurant and still continue to not only cater to the community, but those outside of the community, folks vacationing in the area. The concept will remain the same, but it might not be called Relish. We don’t anticipate the building being vacant long.”

The community is excited about what will be coming to that space next, and Lloyd intends on making sure they’re involved, she said.

Another person who is also excited to see what the space becomes is Evans, who was one of a group of business partners that included the Rev. Alyn Waller and Enon Tabernacle Baptist Church.

In a statement emailed to the SUN, Evans wished the Bynum Brothers well, He also said that he hadn’t figured out where his Election Day event will be held as of yet.

“Relish has served the West Oak Lane community well over the years,” Evans said. “For the past 15 years, I’ve shared great food and memories there. Although I hate to see any business that’s a good neighbor close, I am excited to learn what the Bynum brothers have planned for the future.”