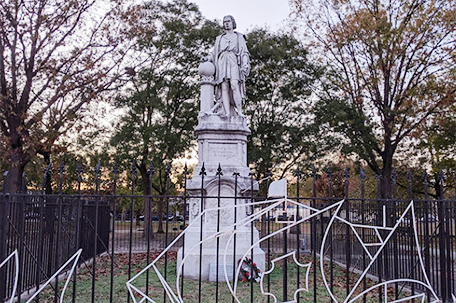 PHILADELPHIA (AP) — A historical panel has advanced plans to remove a 144-year-old statue of Christopher Columbus from south Philadelphia after the explorer became a focus of protesters amid nationwide demonstrations in the wake of George Floyd’s death in Minnesota.

The Philadelphia Inquirer reports that the Philadelphia Historical Commission voted 10-2 Friday in favor of moving the now-boarded-up statue from Marconi Plaza. The vote clears the way for the city’s art commission to decide its fate at a scheduled Aug. 12 meeting.

City crews earlier built a wooden box around the statue following clashes between protesters and residents and the city later announced plans to seek its removal, something some south Philadelphia residents have sued to block.

Commissioner Kim Washington said in Friday’s meeting online that if a piece of public art starts inciting violence, it’s time to remove it.

“I hate to say that as a member of the commission, because of course, we respect history, we respect public art, but above all I respect life,” she said. “We’re talking about people showing up with … guns and baseball bats and hammers.”

Commissioner John Mattioni voted against the move, saying it was necessary to keep the statue in the plaza as a recognition of America’s history, however painful, calling Columbus “a product of his times.”

Commissioners said if the statue is moved, it should be taken to an undisclosed and secure location in the city by a conservator and a firm experienced in relocating important works of art. They also called for a visual recording of the work before any move and an annual report to the commission on its condition. While the city says an online survey indicated that most people said the Columbus statue represented “false history, genocide, racism, oppression,” most of those calling into Friday’s meeting fiercely contested that and said the explorer’s legacy was being misrepresented.

Rich Cedrone, president of the Friends of Marconi Plaza, said he believed the debate over removing the statue was being rushed because of the coronavirus pandemic. He called for a “legal process” with in-person meetings, saying he wouldn’t be against leaving the statue covered until that could happen.

“We do not want to have to stand in front of a statue and worry about people tearing it down,” Cedrone said. “That’s not what our lives are about.”

At Penns Landing closer to Center City, meanwhile, the base of a 106-foot  Christopher Columbus monument was covered in the wake of the protests. Supporters filed a lawsuit accusing the park’s nonprofit manager of breaking an agreement to maintain the 28-year-old monument.

In Philadelphia, a city with a deep Italian heritage, supporters said they considered Columbus an emblem of that heritage. Mayor Jim Kenney said Columbus was venerated for centuries as an explorer but had a “much more infamous” history, enslaving indigenous people and imposing punishments such as severing limbs or even death.

Statues of Columbus were earlier removed in nearby Camden, New Jersey, and Wilmington, Delaware. In Richmond, Virginia, a statue of Christopher Columbus was torn down, set on fire and thrown into a lake. In Columbia, South Carolina, the first U.S. city named for Columbus, a statue of the explorer was removed after it was vandalized several times, and a vandalized statue in Boston also was removed from its pedestal.