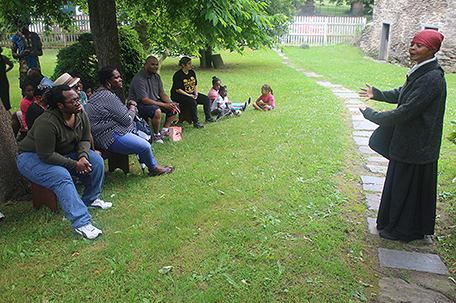 ABOVE PHOTO:  Local actress Millicent Sparks performs a reenactment of Harriet Tubman in the garden at The Johnson House  during the Juneteenth Celebration.  (Photo by Robert Mendelsohn)

The Juneteenth observance — held on Saturday, June 17th along the 6300 block of Germantown Avenue — featured a parade and other ceremonies to honor African-American ancestors and contemporaries. Nationwide, events marked the day of June 19, 1865 — two years after the passage of the Emancipation Proclamation — when Union soldiers arrived in Galveston, Texas, with news that the Civil War had ended, and that the slaves were free.

“Juneteenth is a celebration to recognize the end of slavery. It’s important to celebrate Juneteenth every year, so we never forget we were enslaved,” said Cornelia Swinson, Johnson House executive director. “We all need to have that discourse all over the world, but particularly in the United States.”

The Juneteenth event featured a march along Germantown Ave., live music and a marketplace. Dignitaries and city politicians strolled the festival fairway and mingled with the crowd and vendors as part of the festivities. The event also was a celebration of all things Black and Africa — including history, the arts, independent businesses and food.

Jim and Daisy Manning listened as Civil War US Colored Troops re-enactors explained the contributions and gallantry of African American soldiers in the Civil War.  The Mannings, who traveled from the nearby suburban community of Abington, expressed amazement at the historic facts that were shared. “History is so fascinating. It’s amazing to learn about the importance of the contribution of the US Colored Troops,” said Jim Manning, who was referencing that the 175 USCT regiments constituted about one-tenth of the manpower of the Union Army; comprising almost 180,000 men.

There were also abundant opportunities at the festival to support independent, Black businesses.

Pathfinder Travel Magazine, located on Germantown Avenue for decades, used the occasion to encourage event-goers to consider travel as a professional business opportunity and to provide leisure travel information.

“The travel industry is ripe for those seeking with business ownership venues,” said Weller R. Thomas, who, along with his wife PJ Thomas, coordinates group travel excursions.

State Senator Art Haywood (D -4th Dist.) shared information about his “Read to Succeed Program” summer program. Constituents asked if he planned to bring the “reading revolution” to every block this summer. The program is characterized by community bookstands district neighborhoods.

“Early childhood literacy is the backbone to lifelong opportunity and freedom.” Sen. Haywood said. “Reading opens doors to higher education and self-sufficiency.”  He shared with his constituents the goal of ensuring  that the elementary school students in the Philadelphia neighborhoods of his district will be helped to read at or above grade level.

Several event-goers believed the celebration was good for the community, pointing to the variety of vendors that comprised the marketplace. They included vegetarian, soul and ethnic food vendors; African and African-inspired jewelry and clothing; natural and organic body and hair products, and art.

“It great to ply my trade at community festivals like this, said Heather Greene, who offered a line of ethic hair and skin products. “People mention that they want to support Black-owned businesses, and that’s a good thing.”

“This is a celebration to be proud of. History lets us know there were many people who fought slavery. It’s a great opportunity to teach our children about their heritage and culture.”

Johnny Hodges believes that Juneteenth is Black people’s “real” Independence Day. “Although we celebrate July 4, our people weren’t free,” he said. “Juneteenth is our celebration because it signifies a true break from slavery, and it’s important for us to celebrate at events like this one.”

At the end of the day, event-goers like Tim Jennings believe such community events bridge cultural gaps and expand understanding.

“I think this annual festival builds relationships within the community and without as well — people travel here to celebrate and learn the story of Juneteenth’s history. It’s a great culturally experience,” said Jennings, former Montgomery County native, who now resides in Mt. Airy.