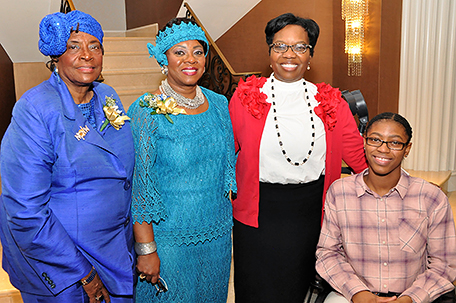 The honorees, all with Philadelphia ties, included:

Founded and chartered in 1945, the Philadelphia Section is one of the National Council’s oldest.

About 200 people attended the annual luncheon, held at the Hilton Philadelphia City Avenue Hotel. They were reminded of the heroic deeds and dreams of the NCNW’s venerable founder, Mary McLeod Bethune, and of her esteemed successor, Dorothy I. Height, while honoring the four awardees for ably following in their footsteps.

Dr. Bethune founded the NCNW as a groundbreaking “organization of organizations” in 1935. She also birthed in 1909 what is now Bethune-Cookman University in Daytona Beach, Florida, counseled several U.S. presidents and advocated for civil rights and social progress for African-Americans. Ms. Height, also an educator and prominent advocate for social justice, took the council’s helm in 1957 and further developed its resources, structure, influence and national presence.

Dr. Lynne M. Holden received the Mary McLeod Bethune Award for her leadership and commitment not only as an emergency medicine physician in New York City for over two decades, but also as a medical educator and mentor working to improve the racial diversity of her profession. The Philadelphia native and Temple University School of Medicine alumna cofounded the nonprofit Mentoring in Medicine in 2006 to help improve diversity in the nation’s healthcare workforce through academic enrichment, leadership development, civic engagement and mentoring. She received in 2016 the American Medical Association’s 2016 Inspirational Physicians Award, among many other awards.

Dr. Tahiya McCoy Nyahama received the Dorothy I. Height Award for her international social change efforts as a researcher, educator and entrepreneurial practitioner of global human and economic development through public policy. Much of her work has focused on Ghana, West Africa, where she earned a Ph.D. in Political Science in 2016, and on enhancing the socio-economic progress of women and their protection from domestic violence, human trafficking and other injustices.

Nyahama, who lives in Philadelphia, did resource and project development work in 32 African countries as a former director of Opportunities Industrialization Centers International, started by the Rev. Leon Sullivan. She also cofounded HealthLink International, a nonprofit that provides global solutions for healthy, sustainable communities.

NCNW First Vice President Arcenia McClendon received the organization’s Intra-Council Award. Lauded for working “tirelessly to promote its mission to serve families in the Philadelphia area,” she has led fundraising and organizing for numerous special events and celebrations. Also, a Temple University alumna, she taught in Philadelphia and Chester public schools for over 31 years, while also teaching music to many students in the area and in her home state of Mississippi.

Destiny Hatten, 17, received the Youth Achievement Award for her leadership in sports and student government at Widener Memorial School, where she is a senior. A two-term Student Council treasurer, Destiny played for 10 years on Katie’s Komets, a Philadelphia-based co-ed, wheelchair basketball team for physically challenged youth. An avid animal-lover, she recently learned about veterinary technology and now wants to study that field of veterinary nursing in college.

“This event is an important opportunity for us to honor women who are walking in the courageous, visionary footsteps of Mary McLeod Bethune and Dorothy Height,” said NCNW President Anna M. Harris. “But these influential achievers each are blazing new trails through their own leadership, commitment and vital service to humanity. We are proud of them.”