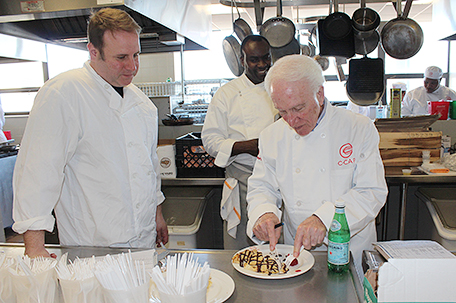 Eighteen aspiring chefs competed in an academic kitchen on Drexel University’s campus, for an opportunity to win thousands of dollars in scholarships.

The event, held on Thursday, March 30, 2017, was organized by the Careers Through Culinary Arts Program or C-CAP, which was founded by Chef Richard Grausman, who admitted that he has been on a culinary mission for more than 20 years.

“Everybody was eating hamburgers, fried chicken and pizza, and I wanted to change the palette of America,” said Grausman, who believed young people could be convinced to enter the profession if they were provided career guidance.

Since its inception, the organization has awarded more than $50 million in scholarships nationwide over the last two decades, according to Grausman. 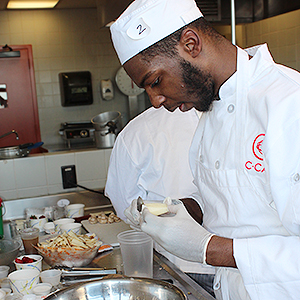 The student chefs are hoping their performances will launch their educational and professional careers in the culinary arts. Their ambitions range from becoming top tier chefs at some of the world’s best five-star restaurants to noted restaurateurs managing their own boutique bistros.

With the clock ticking and the pressure on, the student chefs had two hours to prepare three dishes, as judges watched closely. They moved nervously as they prepared each dish. Their final presentations were examined by the judges for presentation and taste, with a focus on the skills showcased.

It was obvious that the student chefs were nervous. They hoped that their chicken was not undercooked, their crepes were plated correctly or their timing and technique resulted in a perfect omelet.

“It is the demonstration of their skills, consistency and training that will prepare them for employment in the industry,” noted Grausman, who believes good basic skills will enable them to seek culinary mentors, who will teach them the trade.

The caliber of the alumni who returned to judge the competition communicated to student chefs that not only do they matter, but it also demonstrated what they are capable of becoming. Many of the judges were C-CAP graduates who have achieved exceptional accomplishments in the culinary food industry.

There was Executive Chef Sylva Senat, a graduate of the New York C-CAP program, whose remarkable career includes stints at Aqavit with Marcus Samuelsson, followed by time at Jean-Georges Vongerichten (Trump Hotel Central Park). His first position in Philadelphia was at Buddakan. He is now Executive Chef at Maison208 in Philadelphia.

Senat was recently a contestant on ‘Top Chef,’ a reality television series on Bravo, which features chefs competing against each other in various culinary challenges. They are judged by a panel of professional chefs and other notables from the food and wine industry. 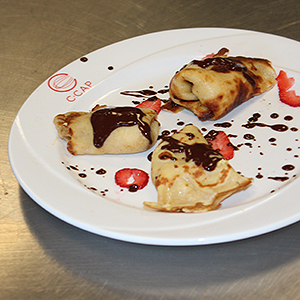 “The experience gained by the student chefs in invaluable and they should take advantage, when possible, of every educational and training opportunity,” explained Senat, who is a program advisor participated in the C-CAP Scholarship Completion in 2007, winning an all-expense-paid trip to France and the opportunity to study at the Institut Paul Bocuse in Lyon.

Executive Chef and restaurant owner Theo Charitos won first place in the competition more than 20 years ago. Now as a judge, he revisited what he believes is essential career advice for the student chefs. “Being fundamentally sound is super important. Also just knowing your way around the kitchen is fundamental,” said Charitos, who practices his trade at the Red Cedar Grille in Colmar, PA.

Recent program alumni know firsthand the importance of scholarship assistance. “The fact that I can help pay for school, while I am working is a big help,” said Antoinette Hicks, who was participating by lending a hand to judges as they reviewed student presentations.

Hicks is currently a student in the Culinary Arts Program at the Community College of Philadelphia. And, while pursuing her studies, she works decorating cakes at Acme Market in Bala Cynwyd. Hicks’ long-term goal is to work as a chef, at a top-rated restaurant.

The winners were announced at the annual C-CAP Awards Breakfast, which was held last Thursday. Everyone was a winner. The last place winner of the competition received an award of $2,000.

There is no doubt the culinary competition was an academic and professional game-changer for the aspiring chefs. That sentiment was echoed by Culinary Arts teacher Penny Greenberg, who said “The significance of this program is that these students are basically going to change their entire life.”