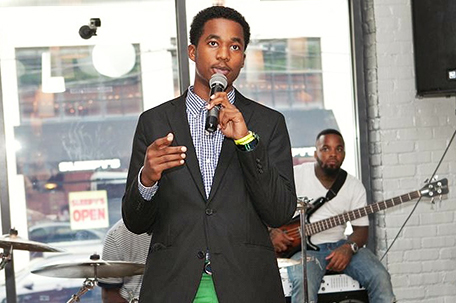 He’s just 17, but you wouldn’t know it by speaking to him. His message is clear, eloquent and emotional. Kasai Guthrie has started the movement that all of us knew we needed. About 43 percent of US children live without their fathers, but the rate of absent dads is more than 71 percent in the African American community. Studies have also shown that absent fathers create a void that often leads to youth delinquency, truancy, depression, and even coping through drugs and alcohol. The message has been clear for years now, we need our fathers.

Most of the work being done in our communities to engage the participation of dads has come from other adults, programs all over the country aimed at empowering single dads to be active in their children’s lives. Not very often do we hear from the children who are affected the most by their father’s absence. Which is what motivated Kasai to start his organization, We Need Our Fathers.

“After my freshman year, I was going through a lot of depression, anger and anxiety, and that lead to the loss of a $25,000 scholarship,” Kasai  said. “I didn’t know how to deal with the fact that my father wasn’t around.”

We Need Our Fathers was started by Guthrie in 2013 to help other youth from experiencing the same issues he faced as a result of an absent father.

Kasai’s father moved to Florida when he was elementary school. Despite his father’s absence, Kasai excelled academically, skipping from 7th grade to 9th grade, launching his own company at age 14, and even starting a basketball team at his former school.

However, a lot of that changed when Kasai’s dad moved back to the area a few years later, but was still not an active part of his son’s life. “I was discouraged by his empty promises, my feelings were hurt, and my life spiraled out of control. I took everything personally and fell into a deep depression that affected my whole life. I stopped working my businesses, all my grades dropped; I got in trouble in school, did not want to wake up to go to school, became defiant and lost my scholarship.”

After a talk with mother, Kasai decided to reach out to his father. “Not only did I initiate contact with my father, but I tried to learn more about him. Now we have a better relationship. We talk about regular guy stuff, like sports and girls.”

The advice he gives to students and parents when he speaks is simple:

“First, you have to forgive. Then you have to initiate contact. This goes for kids and parents. Reach out to your dad and tell him that you want to have him in your life. Spend time with your father, talk to your family to find out more about him.”

Kasai  is currently a junior student-athlete at Glasgow High School in Delaware and is being considered for several Ivy League universities, including Princeton and Harvard, as well as Morehouse University. Kasai’s leadership skills spill over onto the basketball courts, and he is one of Glasgow High’s star players. However, Kasai’s main focus right now is launching his own company later this year.

Kasai  is being asked to speak all over the country to raise awareness about the necessity of paternal involvement in the lives of their children. Guthrie says one of the main thing he wants people to know is that is not only necessary for the fathers to be present, but also for single mothers to allow the fathers to participate. “Single moms have to remember that it’s not about them.”

Although the speaking invitations have been flooding in, Kasai has faced some issues in spreading his message. Unfortunately, many of the organizations that invite Kasai to speak do not have the budget to afford to fly him in, or even pay for lodging, and he’s had to turn some of those invitations down. He recently started a GoFundMe campaign to help offset some of the costs of travelling, and is also selling some tee shirts and other items to raise money and awareness. Kasai  hopes that many will see the value of his message and support his cause so that he can share his experiences with others, and help eradicate some of the many issues teenagers are facing today.

For more information about We Need Our Fathers, or to support this organization, you can visit www.GoFundMe.com/WeNeedOurFathers.