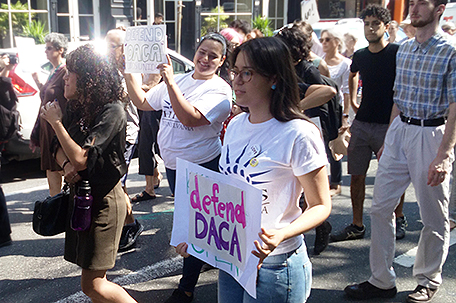 HIAS Pennsylvania is deeply disappointed by President Trump’s decision to end the Deferred Action for Childhood Arrivals (DACA) program. In the five years that the program has been in effect, almost 800,000 individuals have been able to move out of the shadows.  Our agency has worked with hundreds of DACA recipients and seen them thrive – in college, the workforce and at the forefront of the immigrant rights movement.  As a nation, we should be building up our future, not tearing it down.

Ending this program is also an economic failure of vast proportions. President Trump says that he wants a balanced budget, and that he is willing to cut millions of dollars for critical needs, but with the stroke of a pen he just signed away $24.6 billion in Social Security and Medicare tax contributions that DACA recipients would have provided over the next decade had they been able to continue working and paying taxes. Thanks to the DACA Executive Order, they have been an integral part of the American economy for five years.

Eliminating their authorization to work will mean that employers will lose $3.4 billion in turnover costs. Make no mistake, this is a huge hit to the American economy that President Trump states he is so committed to helping. Ending DACA hurts Americans.

Given this, passage of the bipartisan Dream Act 2017 — which would make work authorization for the DACA population a law rather than an Executive Order, is more critical than ever before. The sooner that we can stop the fiscal bleeding by putting former DACA recipients back to work, the better off all of us will be.

Help lessen the devastating economic impact of eliminating DACA.  Support the Dream Act of 2017 and let Congress know that it should be passed A.S.A.P.

HIAS Pennsylvania is a 501(c) 3 non-profit organization that provides legal and social services to low income immigrants and refugees in the Philadelphia area. For more information, visit www.hiaspa.org.