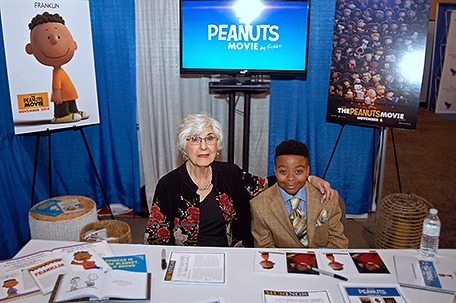 ABOVE PHOTO:  Harriet Glickman with actor Mar Mar who will voice the character of Franklin in the new Peanuts movie in Nov.; in a booth at the NAACP Convention 2015 last week at the PA Convention Center.  (Photo by Bill Z. Foster)

This year, the beloved characters created by Charles M. Schulz will celebrate their 65th anniversary as part of the fabric of our culture. Hailed as one of the greatest cartoonists not only of his generation, but of all time, Schulz had the ability to take the most ordinary circumstances of everyday life and turn them into poignant observations as told through voices of a group of kids (and a beagle).

Although he never thought of himself – or the characters he created  – as opinion leaders or trendsetters, whether he realized it or not, Schulz was clearly ahead of the time with regard to social commentary and the influences his words had on a generation of readers.

It’s no wonder that Schulz found himself at the center of attention with the introduction of the character Franklin to the strip in 1968.   Not only was Franklin the first African American to make an appearance in the strip (and become a permanent fixture), he was the first minority character in a major, mainstream comic strip.

Given the climate of race relations in 1968, a country (and world) still mourning from the assassination of Dr. Martin Luther King, Jr., the introduction of Franklin to the established world of Peanuts was not only timely, but retrospectively, groundbreaking.

Shortly after the assassination of the Rev. Dr. Martin Luther King, Glickman wrote to Schulz regarding the lack of minority representation in the Peanuts.    By 1968, with Emmys, a Peabody Award and a global merchandising program, Peanuts was at the height of popularity.  Given the success of the strip, Glickman believed that Schulz  – and his voice – could bridge a gap and influence attitudes on race relations.  Known for imparting words of wisdom through the voices of kids, Schulz possessed the ability to organically weave socially relevant topics into the comic strip without even realizing, and Glickman knew it, believing the brand – and she stated in her letter to Schulz – had a “stature and reputation which withstand a great deal.”

“You need no reassurances from me that “Peanuts” is one of the most adored, well-read and quoted parts of our literate society,” she says.

Last year, the Charles M. Schulz Museum in Santa Rosa, California displayed the letter and correspondences between Glickman and Schulz (which spanned three months) in an exhibit on the social commentary throughout the comic strip.

The timing of Glickman’s initial letter to Schulz was no coincidence.  In his first response back to Glickman, Schulz empathized with the schoolteacher by writing, that he and other cartoonists at the time were aware of the lack of minority characters, but were unsure of just how to integrate a minority character with being patronizing to a particular culture.

To alleviate those concerns, Glickman reached out to her African American friends to candidly ask for their thoughts on the matter.   The response was overwhelming, with one mother of two writing to Schulz (via Glickman) her support of  “….the inclusion of an [African American] character even occasionally  in your comics would help these young people to feel it is a natural thing for children [Caucasian and African America] to engage in dialogue.”

Over the course of their exchanges, any concerns that Schulz had of receiving criticism for handling the introduction of a new character of color in a “condescending manner” were alleviated.

In early July of 1968, Schulz sent Glickman a letter with the following note:    “I have drawn an episode which I think will please you.”

On July 31, 1968, Charlie Brown, while on summer vacation with Sally, Linus and Lucy at the beach is seen looking out at the ocean, when Franklin approached, having found Charlie Brown’s beach ball.   As simple as that, the first African American character was introduced into the world of Peanuts.

While the introduction of Franklin widely drew praise from both critics and fans, it was not without its detractions.   Schulz received letters from fans opposing the idea of Franklin attending school with Peppermint Patty and Marcie.

Schulz ignored them – and Franklin would go to appear in TV specials (his first appearance was in “A Charlie Brown Thanksgiving) and movies and remained a central character for the of the strip.

For her part in all of this, Glickman remain proud as ever to be associated with the iconic character and strip by offering,  “I often like to say that Franklin is my third child.”