Here’s What We Know… (Part One) 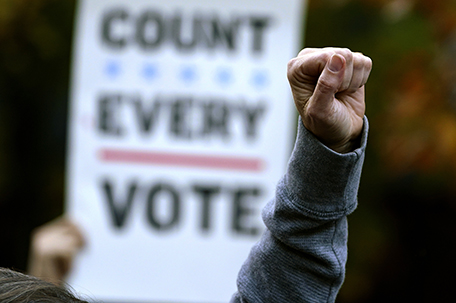 ABOVE PHOTO: Demonstrators urge that all votes be counted outside the Pennsylvania Convention Center, Wednesday, Nov. 4, 2020, in Philadelphia. (AP Photo/Matt Slocum)

While the statewide races aren’t quite decided yet, here are some local questions that we already know the answers to.

As of press time, the Pennsylvania Convention Center in Center City is still abuzz as the vote continues to be counted in Tuesday’s elections.

In spite of the ability to mail in ballots or drop them off in drop boxes due to new regulations brought on by the COVID-19 pandemic, more than 700 polling places were open for voters who wanted to go and vote in person, City Commissioner Omar Sabir said.

DJs, food trucks, and even a Life Do Grow farmers market met voters as they stood in line. Local pizza shops also offered slices for voters.

How you saw turnout depends on where you were stationed.

“We have 600 names on the voting list, and sometimes only 200 people come out,” Geneva Carter, who was working at a polling location in South Philadelphia’s 36th Ward, said. “But I think that this time, everyone has come out.”

“Usually, we have the students from Temple voting here, but they’re out of school because of the pandemic.”

Because of this, a few things are about to change when it comes to the relationship between city residents and their police department, families victimized by violence will have an advocate, and the city will have some much-needed funding to take care of neglected needs.

A ballot question that would allow the city to borrow $134 million for such things as transit, streets and trash was passed.

Question 2, which would create a new Office of the Victim’s Advocate in Philadelphia also passed. The ballot question, which was spearheaded by Councilmember Kenyatta Johnson, chair of Council’s Special Committee on Gun Violence Prevention and co-chair of Council’s Public Safety.

While this could be seen as a victory for Johnson himself, it’s actually a victory for Philadelphia’s families, Johnson said in a statement.

“I want to thank all Philadelphians for voting overwhelmingly to approve Ballot Question #2, which will create a new Office of Victim Advocate in Philadelphia,” he said. “Thank you for supporting the mothers, fathers and families who have lost loved ones to gun violence in recent years by approving the Office. I put this question on the ballot for them.”

The other two ballot questions, Questions 1 and 3, related to police policy and oversight.

Question 1 makes it illegal for the Philadelphia Police Department to use the practice of stop and frisk without reasonable suspicion of a crime. While the ACLU has been monitoring the police department’s use of stop and frisk since a 2011 consent decree was put in place, this question was spurred by the group’s finding that the practice was being disproportionally used against Black and Brown people. This prohibition will now be put into the City’s Charter.

Ballot Question 3 is also a charter change and creates a stronger Citizen’s Police Oversight Commission. This commission, which would be overseen by Philadelphia City Council instead of the Mayor’s Office, would, in theory, have more power than the outgoing board. Among those powers would be the power to subpoena officers as witnesses, and body camera footage similar to the footage released from the Walter Wallace Jr. shooting.

Activists have called for the commission to have the kind of autonomy that similar boards in cities like Chicago and New York have, but it’s unknown if Council will allow for that.

It is also expected that Philadelphia’s Fraternal Order of Police will challenge both measures. The FOP is currently in court fighting a law passed by City Council earlier this year that mandates public input on police contracts.