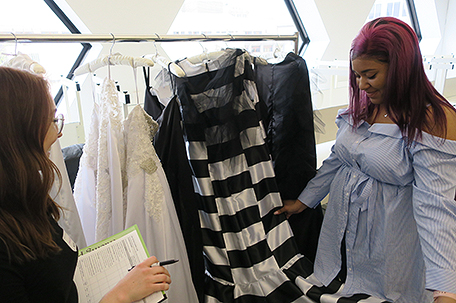 ABOVE PHOTO: Moore College graduate Atiya Lewis prepares for her spring/summer fashion show while having her senior critique.

Atiya Lewis wants to make brides and bridesmaids of all sizes look their best.

When you’re what the fashion industry considers a plus-sized bride, getting ready for that special day takes a lot more patience.

As someone who has recently undergone that process, I can tell you that it’s not all “Say Yes To The Dress”.

First, you have to make sure that they have the dress of your dreams in your size, otherwise you may as well not try it on. And if you do try it on in most wedding dress shops, they’re not going to have it to try on in your size so that you can see exactly how you’d look in it.

But even if you find the dress of your dreams, and it’s available in your size, you’re going to have to pay extra for it because, well, it’s in your size.

Atiya Lewis, a recent graduate of the Moore College of Art and Design’s Fashion and Apparel Design program, gets it.

“I was just in a wedding last August and I having a hard time finding a dress that I liked,” she said. “I went out two or three times to find a dress and all of the dresses I liked either only came in smaller sizes or they were out of stock.”

So Lewis decided to take the laws of fashion into her own hands and design something that you don’t see a whole lot: couture wedding and bridesmaids dresses for the tall and/or curvy woman.

As part of Moore’s spring and summer fashion show last month at the Barnes Foundation, Lewis showcased a black and white collection of bridesmaids’ dresses, dresses for the mother of the bride, and two takes on a bridal dress.

For Lewis, the collection builds on something she’s wanted to do since she made her first ball gown in the sixth grade.

Working from her studio in her grandmother Yvonne’s basement in West Philadelphia, Lewis put together a collection that told a story and did it using fabrics that designers don’t often want to use for plus-sized fashions.

“There aren’t many designers that do plus-sized wedding dresses in satin,” Lewis said. “That’s because you need more material and it requires more work.”

During the Moore fashion show, Lewis displayed a collection that embodied the theme, “Out Of The Dark, Into The Light.” The story it was designed to tell was of a woman who was battling depression and who was emerging from it to begin a new life.

The collection started with a dramatic, long-sleeved, black, satin bridesmaids’ gown with feathery appliqués on the arms and shoulders. Next, was a strapless, black satin gown that would also be good as a bridesmaid’s dress, but also as a special occasion gown.

The next two dresses were satin gowns with black and white stripes. One was strapless and fitted, the other was a sleeveless, mermaid gown with the same black, feathery appliqué that the first dress in the collection had.

But it was the bridal gowns that stole the show. The first gown was for the wedding: a ball gown with beading on the top and lace on the bottom. Next, was a dress for the reception, a sleeveless dress with a sheer, white tulle skirt. The last one was an afterparty dress, a white satin sheath that with a cape made with lace and beading.

In addition to her grandmother, Lewis’s parents, Robin and Salim, were beaming with pride as the models went by. For Robin, it showcased a talent that she knew her daughter had all along.

“This was amazing,” Robin said. “I’m so proud. I knew how talented she was when she was younger, and she made a wedding gown by hand.”

“I’m still in awe,” Salim said. “She’s truly talented and I know she’s going to do great things in the future.”

For Lewis, the future is now. While attending Moore, she created her own company, Joanne Fashions. In addition to making plus-sized brides and bridesmaids look terrific, her website showcases some amazing prom gowns, and other custom made outfits that will amaze you.