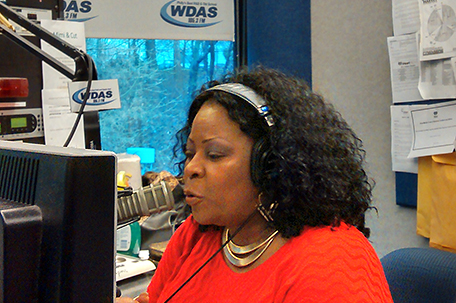 ABOVE PHOTO:  Darcell at the mic at the WDAS radio station.

The influential show touched on civil rights and community issues relevant to the Philadelphia community as well as the nation, broadcasting to thousands of listeners.  Mondesire over the years interviewed countless entertainers, civil rights activist, dignitaries, clergy, politicians and Presidents. His show kept the African American community informed with current issues affecting the lives of the everyday people.

“I recall Jerry coordinating “The March To Save The Children” in 2004 in front of T.M. Pierce Elementary School with the NAACP, Deliverance Evangelistic Church, City Officials and WDAS radio,” said Henderson.

“Jerry was one of the few great leaders in this city, right up there with Cecil B. Moore,” said Loraine Ballard Morrill. 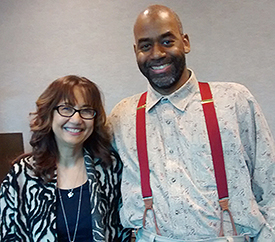 Morrill, Director of News and Community Affairs at iHeartMedia, spoke highly of the late civil rights icon,  J. Whyatt  “Jerry” Mondesire, who passed away in October of last year, reflecting on his legacy and the impact of his weekly Sunday morning program Freedom Quest.

Over 25 years ago, Morrill hired Mondesire who in 1991 became President of the Philadelphia chapter of the NAACP,  to host the weekly public affairs show.

Mondesire’s leadership as President of the local chapter NAACP and in later years PA state chapter President, spanned over twenty years. Growing its chapters to 5000 members.

After Jerry’s passing in October of last year, it was a natural choice to fill Freedom Quest’s slot with another public affairs program. Headlines with Frankie Darcell was a perfect fit.

Darcell, a Brooklyn native and community activist, has worked in radio for the past 25 years.  Her hearty and rich voice has blessed audiences from Baltimore, Norfolk, Charlotte and currently in Detroit at Mix 92.3 and on WDAS 105.3FM.

Darcell, also a radio icon in Detroit where she spent most of her career, came to WDAS three years ago where she still holds down the afternoon slot with her weekday slot Talk of the Town with Frankie from 3-7p.m.

“ I was doing a similar show for last 24 years,” speaking of her public affairs background before coming to WDAS,” said the mother and author who has also interviewed many influential leaders including President Barack Obama.

Darcell said she always wanted to do a public affairs show here in Philadelphia.

“I met Jerry. I listened to his show. I read his newspaper [SUN] on a regular basis. Unfortunately as a result of his death the opportunity became available.”

She began Headlines with Frankie shortly after Mondesire’s passing.

Darcell is clear on the respect she has for Mondesire.

“Making my transition here, I wanted to get to know Philly a lot better before taking the responsibility of a public affairs show.”

“I was approached about doing the show. I thought it would be out of great respect for the legacy of Jerry, great respect for the number of years he was doing that timeslot.  I’ve been a supporter of the NAACP.  Jerry was one of the first community leaders I met when I moved to Philadelphia and he was one of the most consistent who I watched how he navigated politics in Philadelphia and I respected that.”

The first Headlines with Frankie, started with a tribute to the late Mondesire and offered his son Joseph Mondesire and Jerry’s fiance Catherine Hicks, who together continue to publish his SUN newspaper,  the opportunity to call in during the show. “ I thought it was proper taking over that time to invite those very close to him to have an opportunity to be a part of the show.”

Ironically, Mondesire and Darcell have something else in common. Both have family roots tied in New York activism.

Mondesire’s mother was a member of the Abyssinian Baptist Church led by civil rights activist Adam Clayton Powell Jr., who was the first African American to represent New York City in Congress. His father had been a supporter of Black nationalist Marcus Garvey.

Darcell notes the similarities between struggles Blacks are having in Philadelphia and Detroit and communities across the country.

“Looking at the political landscape of Philadelphia, it’s quite frankly very commensurate to that to the city of Detroit.  Reading the Sunday SUN, it’s almost like reading the African American publications in Detroit for the past 15 years.”

“Black folks across the country are dealing with all the same issues,” says Darcell mentioning that she would be having these same conversations on air in any city.

Darcell plans to use her platform to turn a serious spotlight on poverty.

“I really want to get into the issue of dealing with poverty. Black folks are struggling in this city. Young people are hungry in this city. We’re driving by people every day and they’re scrambling to keep a roof over head.”

Listen to Headlines with Frankie every Sunday morning at 7am on WDAS 105.3FM or on the iHeartRadio app.