Hazim Hardeman, Rhodes Scholar and kid from North Philly: Never mistake our being first, for being the first that were worthy.” 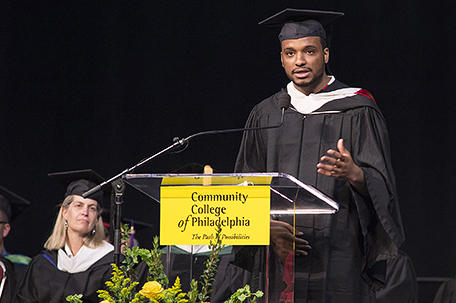 ABOVE PHOTO:  Hazim Hardeman, Rhodes Scholar and CCP and Temple University alumnus speaks to the Class of 2018 at the May 5th Commencement.

Hazim Hardeman, a kid from North Philly, a Rhodes Scholar and a Community College of Philadelphia alumnus, had a message for the City as he spoke at the College’s 52nd Commencement at The Liacouras Center last week:

“Many of you are the first in your family to attend college, others of you are the first to graduate. And there’s a particular lure about being a first, the stroke of the ego, the feeling that you’ve been able to accomplish something that others before you couldn’t.,” Hardeman, the College’s commencement speaker, told the students, families and friends of the Class of 2018.

“But we should never mistake our being first, for being the first that were worthy,” he cautioned. “Because if we’re being honest, it is through the paths that others before us have traveled, that ours have been made easier to traverse.”

Hardeman is the first Rhodes Scholar from the College and Temple University.

Listening from the front row were six high school students from MaST Community Charter who were about to graduate from college before they finished high school. Also in the Class of 2018 were six employees from the College, 54 veterans, and 26 international students representing 16 countries. There were a total of 1,885 candidates for degrees and certificates this year.

Hardeman grew up just a few blocks from The Liacouras Center and began his speech by crediting his neighborhood: “I always mention that I’m just a kid from North Philly (and I say this not only because North Philadelphians are the coolest people in the world), but because I want to suggest that I’m no different than anybody else that comes from where I come from,” he said.

“If I have done things that are extraordinary, it is not because I’m inherently special,” he said, “but rather, it is a product of the opportunity I’ve been given.”

Hardeman’s academic journey has taken him from 23rd and Diamond Streets in North Philadelphia to the University of Oxford, where he is the recipient of the Rhodes Scholarship, one of the oldest and most prestigious international academic awards available.  The scholarships provide all expenses for two or three years of study at the University of Oxford, where Hardeman will pursue a master’s degree.

During his speech, Hardeman paid tribute to his mother, Gwendolyn, who made certain he and his siblings had access to quality education.

He also acknowledged a teacher who continued to believe in him even when he was not showing up for classes or performing well.

“I can specifically remember one moment that, in retrospect, probably saved my life. I was given a book by my English teacher, “Tyrell” by Coe Booth, about a young black boy trying to navigate the trials of adolescence while dealing with a challenging family situation,” Hardeman said. “I’m not sure how this teacher knew that I needed that book at that moment in my life, considering I never went to class. But I did. The book spoke to me. It resonated with me as I saw myself reflected in its pages. It let me know I wasn’t alone in the world.

Hardeman urged the graduates to make certain opportunity is available to those coming behind them.

“So, while here at the Community College of Philadelphia we talk about the path to possibilities, today what I want us to consider is our path as a possibility,” he said.

“As you take the next steps in your journey,” he said, “I want you, along the way, to consider your path as possibility, not only in your thoughts but in your actions, which means as you walk through doors, don’t close them behind you; leave them open for the next person to walk through, and for the person after them to tear them down.”

Student speaker Bundy, the 2018 winner of the J. Whyatt Community Impact Scholarship Award at the College, was also a “first,” the first in his family on the path to college graduation. “You too may have not understood fully where that path would lead,” he said. “But with the help and leadership of our Community College of Philadelphia’s administration, faculty and staff, our path became brighter and brighter each day, and our destination more sure.”

North Philly student heads for Oxford, asserts that community college was more than a stepping stone