Having A Good Time Helping Others 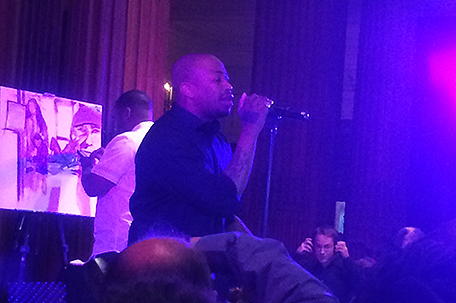 Sunday’s We Feed The Homeless Philly Gala gave Philadelphians a chance to enjoy great music, great food, and the warm feeling that comes from helping others.

For many of the folks attending Sunday’s We Feed The Homeless Philly gala at the Crystal Tea Room, the chance to take a picture with friends was hard to pass up.

Whether it was a professionally done shot taken in front of the charity’s logo or a photo snapped with a cell phone, the people who came out for the third annual fundraiser thrown by the three-year-old charity took time to immortalize the moment.

Shauna Collins of Penn Rose and Norman Williams of Southwest Philadelphia were among those waiting to take home a photograph of a night to remember.

“This is my first time coming to this event, but I’ve come out to help [We Feed The Homeless Philly] serve food,” Collins said. “I’m having a great time and it’s for a great cause. I really don’t want the night to end.”

“It’s great,” Williams said. “This is a good turnout and it’s for a good cause. This event gets better every year.”

About 600 people put on their best evening wear and came out to the Wanamaker Building to dance, dine, and listen to some great live music from Raheem DeVaughn, Eric Roberson, and DJ Jazzy Joe at the gala.

But while it was a good time to have a great time, Craig Stroman, WFTHP’s founder and CEO, reminded the audience that the merriment had a purpose.

Over the three years that We Feed The Homeless Philly has been in operation, the group has served over 50,000 meals at St. Phillips Baptist Church at 16th and Girard on Tuesdays and at 18th and Vine on Saturdays. The organization hopes to eventually be able to offer literacy and workforce development classes for the homeless, Stroman said.

This year’s Mistress of Ceremonies was 100.3 The Beat personality Tiffany Bacon. Bacon, who also hosts the show “Praise In The City” on Praise 103.9, had interviewed Stroman on her show to talk about the work of WFTHP.

When Stroman asked for her help, Bacon was happy to oblige.

“I really wanted to be here,” she said. “What his organization is doing is really important. I wanted to help.”

Now Sunday nights are kind of tough when it comes to events like this. You have to go to work the next day and staying up past 11 p.m. can sometimes be too much to ask.

But for the people who came to the gala, the cause was enough to put on your best outfit and do the kind of dancing that leads to a good night’s sleep.

Especially since the event keeps getting better.

“I’ve been to all three of [the galas] and I think that this one has shown its maturity,” said Reggie Grose of Sicklerville, New Jersey. “This event is really coming into it’s own. I’m having a great time and everyone here feels like family.”

Dressing Up For Dinner