“Hate is the virus” 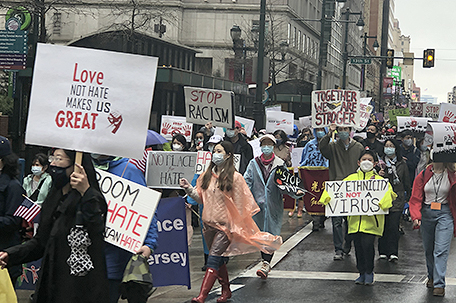 Marchers took to the streets last Sunday to demand an end to the abuse and hate that Asians have been subjected to due to the COVID-19 pandemic.

Rain didn’t stop marchers from all over the tri-state area from coming to Philadelphia’s Chinatown last Sunday for a march designed to bring awareness to COVID-19-related hate crimes against the community.

Action 4 Asians organized the march, which was held to bring attention to a rash of COVID-19 pandemic-related hate crimes against Asian Americans across the country. About 1,000 people came out to make their voices heard against an increasing problem, said Sharon Hou, one of the organizers for the event.

While the Philadelphia area hasn’t seen the kind of uptick in anti-Asian hate crimes that has been seen in places like New York and San Francisco, there have been some hot spots, Hou said.

“In certain pockets of the community, some people might feel justified to use Asian slurs; to call us the ‘China Virus” and to pretend that they didn’t know that many of us have lived here for decades and that some families have been here for centuries,” she said. “They feel justified to say, ‘Go home! You don’t belong here!’

But, I see the response we’ve gotten to this march as a signal of hope. There are a lot of people here who are not Chinese who have come to support us.”

Carrying signs that said, “No More Silence!” and “Stop Asian Hate”, the marchers walked from the Chinatown Friendship Gate at 10th and Arch Streets to City Hall and back again to make their voices heard.

According to the organization Stop AAPI (Asian American Pacific Islander) Hate, hate crimes against members of this community went up by 146%.

Much of that increase can be laid at the door of people like former President Donald Trump, who blamed the COVID-19 pandemic on the Chinese and took to calling it “the Chinavirus” and in some cases, “the Kung Flu.” Asian Americans have endured hate crimes ranging from beatings to incidents like the mass murder in Atlanta two weeks ago.

No Hate In Our State?