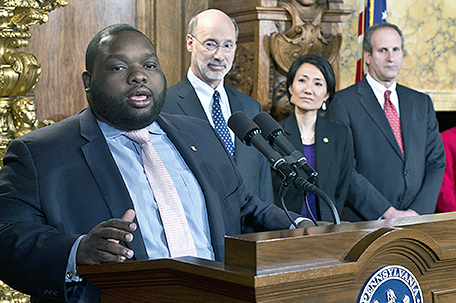 Harris and Wheatley are the driving force behind H.B. 715, which they discussed today at a Harrisburg news conference attended by other like-minded legislators.

“Well-established research indicates that expulsions and suspensions negatively impact the education, development, health and life of students – particularly those of a young age,” Wheatley said. “This bill seeks to keep more school-age children where they belong, which is in school.”

“If we want to strengthen the educational foundation of the commonwealth’s young people, one way to do that is making sure that out-of-school suspensions at the elementary level are reserved only for serious offenses,” Harris said. “It is better to keep as many students as possible in school instead of sending them home, where they may be unsupervised and may fall further behind academically.”

Supporters of the bill include Kristina Moon, staff attorney with the Education Law Center.

“We hope Pennsylvania will follow the national trend and limit exclusionary discipline for our youngest learners and reduce out-of-school suspensions and expulsions for all students,” Moon said. “Research shows that suspensions increase the likelihood of future challenges for students including additional discipline, truancy, drop-out, or involvement in the juvenile justice system.”