Gun violence affects all of us 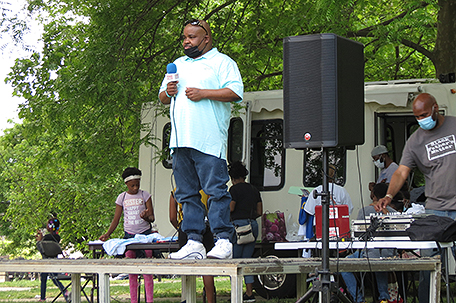 The gunshots heard in every neighborhood in Philadelphia in the past weeks come with the anonymity of those who are committing these violent and heinous crimes.

The anguished screams of families who lose a loved one to gun violence is filled with heartbreak, anger and a sense of the dreams of those lives cut short.

Last week during  a series of “Stop Gun Violence” rallies being held at the Sister Clara Muhammad Park at 47th & Lancaster Avenue, residents came out to listen to the speakers and share their messages about stopping gun violence loud and clear for anyone who would listen.

Derrick Pratt, one of the event partners who has been on the front lines during the COVID-19 pandemic, addressing  his community’s  food insecurity struggles, talks about why it was necessary for this event to take place and its importance.

“I think it’s important right now that we bring awareness to this,” he said. “ Coming out of the pandemic, and even before, Black on Black crime and the homicide rate has been ridiculous.”

Losing your child to gun violence is one of the most devastating things that could happen to a mother, especially one that works hard as a corrections officer.

Terry Jenkins shared her tragic story of her 19-year-old son Tajaun, who was gunned down in Mantua just around the corner from his house.

Through Jenkins’ story, you gain some insight on what every mother must be experiencing when this happens.

“It’s the most horrific thing that you can ever, ever, ever imagine in your life,  because it causes health issues and you can’t sleep at night,” she said. You can’t rest. The anxiety and panic attacks are not good, because I have to know that I will never see my son again.”

“You may see guys walking around today — they may not have been arrested yet, [and] you won’t have any peace for the rest of your life,” Jenkins continued. “You may enjoy your days and nights, but nothing goes unnoticed by God. Give your life to God and ask him to change your ways to not kill one another.”

Many of the residents proclaimed the young people needed protection at the event while keeping them occupied with arts and crafts and holding up signs to motorists passing by the rally.

Dwayne Walker, who works with youths at a literacy program through the People’s Emergency Center (PEC),  spoke about how he used to be in the streets, carrying guns and how he turned his life around after joining PEC.

The city’s homicide rate continues to climb as politics has been injected into the equation — of how some solutions are needed to reduce the gun violence and take the criminals off the street. Former Democratic candidate for District Attorney Carlos Vega, who was bested by incumbent Larry Krasner on Tuesday, also stopped by the rally and offered his viewpoint on the issue.

The latest and newest tool available to perpetrators and residents to try and help with the reduction of these shootings and killings in Philadelphia is the high-tech app called the Philly Truce App. The goal is to reduce anticipated shootings that can be avoided by making a good decision not to use gun violence as a way of solving their disputes.

But at the beginning and end of every day in the back of the minds of many residents, young and old, the simple concern was best said by the sign at the event that read, “AM I NEXT?”.