A guide to all things Philadelphia: Ask Mayor Kenney

Since the implementation of the Soda Tax, small businesses such as mom and pop grocery stores, small restaurants, are really feeling the results and losing money from beverages  because their customers have stopped buying drinks, causing some to consider moving out of the city. Can anything be done to help these small business stay in the city? It doesn’t seem fair, they are just selling what the public wants.

Thank you for sharing your concern for the City’s small business community. Stores who do see a decline in sweetened drink sales and decide to shift to healthier products are eligible for the Healthy Store Tax Credit.  This credit, offered against the City’s Business Income and Receipts Tax, is offered to qualifying merchants who increase their inventory of healthy beverages.  The credit is calculated as the difference in merchant cost for healthy beverages compared to the prior year, up to $2,000.

I also believe these small business owners will benefit from the programs the Philly Bev Tax will fund, pre-k, community schools and investments in parks, recreation centers and libraries. These anti-poverty programs create jobs, in the near and long term, and reduce crime, both of which will make it easier to be a business owner in the City of Philadelphia. 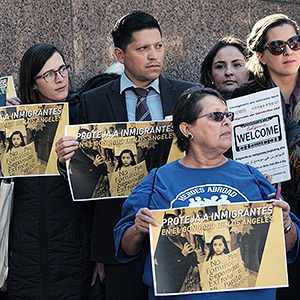 How long can Philadelphia stay a “sanctuary “city without bearing the brunt of the Trump White House retaliation? What can we do as Philadelphia residents to help keep us a sanctuary city?

The Executive Order passed by President Trump did not actually take away any money from Philadelphia, yet. It just authorized the Secretary of Homeland Security to explore ways to cut federal grants to “sanctuary cities,” and we believe that, ultimately, Congress would have to act in order to effectively cut off any significant funds. Even if that happens, we think we have a strong legal case to fight it.

So, we are not losing hundreds of millions of dollars tomorrow. But that doesn’t mean we should act. Here’s what you can do:  The State legislature is voting on SB10, which would attempt to withhold all state grants from Pennsylvania’s 19 sanctuary jurisdictions. Call the Governor and state legislators and let them know that the way to resolve policy disagreements is not to attempt to defund entire municipalities.

I thank you for your commitment to welcoming immigrants and refugees from around the world to our great city.

For more information on getting started in adult education classes, call the Office of Adult Education at (215) 686-5250 or visit www.philaliteracy.org.