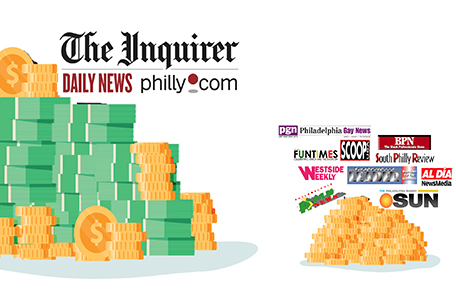 The Philadelphia Inquirer wants and expects to be the only game in town as a media presence by any means necessary, much to the dismay of minority neighborhood newspapers.

Philadelphia’s minority and multi-cultural news media organizations are under attack.

And if the Philadelphia Inquirer has its way, some of them will cease to exist in the next few years.

An incendiary article penned by Inquirer writers Craig R. McCoy and Jeremy Roebuck on April 27th spoke about how the Philadelphia Sheriff’s Department — currently headed by Jewell Williams — distributes their Sheriff’s Sales advertisements throughout the city’s varied news publications. Apparently, the ‘Inky’ and its defenders feel that too many ads are being placed in newspapers that go beyond the “one newspaper of general circulation and legal publication” rule in exchange for political favoritism with the Sheriff’s Department.

What! Cronyism in Philadelphia? Say it isn’t so!

The Liberty City Press Group —- which includes the SUN, Al Diá, and the Philadelphia Gay News —- and Cardenas-Grant Communications submitted proposals for the ads that in the past only the Daily News/Inquirer, the Legal Intelligencer and the Philadelphia Tribune have benefitted from.

The community publications that make up the Liberty City Press Group depend on the revenue that these ads bring to cover the cost of operations, salaries, distribution, etc.  The neighborhoods these papers represent need to have a voice, because they have historically been underrepresented in the mainstream press. In fact, they are covered negatively more often than not.

Minorities and special interest groups need their own media, a media that features stories about them, told from their own unique perspective. They need the issues going on in their communities to be covered without a slant and of local events of interest the Inquirer and Daily News don’t have the staff or interest in covering.

Readers need to hear alternate sides of news — the good AND bad — of interest for this constituency, focused coverage that only the neighborhood papers provide.

Most neighborhood papers struggle with shoestring budgets, but are devoted to distributing news to the community. Sheriff’s sale ad revenues can make the difference between getting printed and not getting printed, as well as supporting other necessary overhead. And while some mainstream papers are having  problems staying afloat, community papers have actually thrived because of continued demand from the communities they serve.

Neighborhood papers should have a right to pursue the same opportunities to fund their papers as the mainstream media does. This is not taking anything away from the Inquirer, which in addition to the over $2 million of Sheriff Sales revenue they take in, makes more than several million dollars a year in other ad revenue.  Believe me, they’re not hurting.

Continue to support your neighborhood newspapers, in print and online.  They tell your stories, what you want to read about, and cover events important to you.

In these days of a shifting media landscape, the Inquirer would love to create a monopoly where they are the main print game in town for news and shut out the community newspapers.   However, there’s more than enough room for diverse media too. And it’s necessary to keep Philadelphia’s media both inclusionary and relevant.

Teresa A. Emerson is managing editor of the Philadelphia Sunday SUN.

Guest Editorial: Benefit of the Doubt