Guest Editorial: Benefit of the Doubt 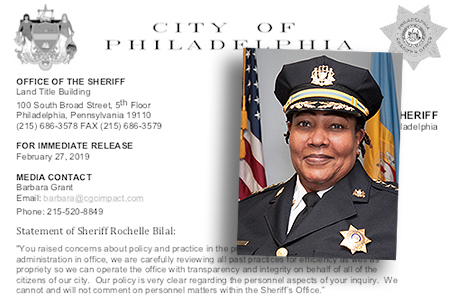 For a long time, few local government offices have generated more attention-grabbing news than the Philadelphia Sheriff’s Office. From John Green’s $675,000 bribery scheme to the numerous sexual harassment lawsuits filed against Jewell Williams, there was no shortage of fodder coming out of the Land Title Building.

Thus, we were not surprised to read about the latest efforts to bring the office low in the Inquirer last week via the report of Brett Mandel being fired as Sheriff Rochelle Bilal’s chief financial officer after five weeks on the job for what he said were his concerns over spending practices.

Like many who care about Philadelphia, we know Brett Mandel is a good-government advocate, a gadfly for municipal improvement who’s good with numbers.

Here’s a good number: 56. That is how many days elapsed between Bilal being sworn in and the Inquirer story.

Bilal was elected on a reform platform. She defeated a two-time incumbent in the primary without the support of the city’s massive Democratic operation. She earned her job at the polls, and she earned the benefit of the doubt from an electorate that gave her a mandate for change.

As the new sheriff in town, Bilal has faced a host of challenges trying to effect that change, including assembling her transition and management team. As any survivor of such a changeover – or, really, anyone who has endured being part of a startup or leadership change – can attest to, there is going to be a lot of churn.

Sheriff Bilal will be under a microscope for most if not all of her tenure. But if we’re going to be so focused on her, let’s make sure we see the big picture as well.

With permission from the Philadelphia Public Record.

Ed. Note: This is the statement issued to the Inquirer.  In addition the Sheriff is doing a 100 day review and will address many of these open questions when the review is complete.

“You raised concerns about policy and practice in the previous administration. As a new administration in office, we are carefully reviewing all past practices for efficiency as well as propriety so we can operate the office with transparency and integrity on behalf of all of the citizens of our city. Our policy is very clear regarding the personnel aspects of your inquiry. We cannot and will not comment on personnel matters within the Sheriff’s Office.”

Guest Editorial: On race and place, Philadelphia must play by the rules

Guest Editorial: Know your rights at the polls