Guest Commentary: Waking up to the dysfunction, destruction and disheartening acts in America 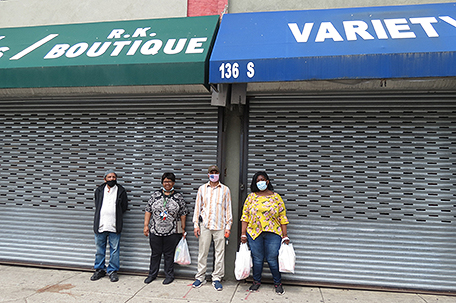 ABOVE PHOTO: Courtesy of Jim Brown

The powers of some protests do create some positive change for the betterment of our society in very small ways. Look no further than our city removing the Frank Rizzo statue.

As an African-American male in this country I’ve been called the “n-word” three times in three different situations so far in my life. The first time was at Independence Blue Cross in 1992, the second, at a Sprint training with an employee at an outing in Kansas City, Missouri, on September 9, 2001; and the third time was with my ex-wife and son in the car waiting to pick up my daughter from her junior prom in 2017.

The actions of targeting the lives of Black men — through reports from a white town watch member, or just a white man with deeply held racist views  — is very disheartening and dangerous to the life of our culture and the reduction of the Black males in America.

On June 3, I finally went out to survey the damage and impact that the death of George Floyd had through protesting, misguided looters and intentional opportunists who wreaked havoc around Philadelphia and in other cities in America.

The sadness of African Americans and people of color  saying, “Here we go again,” and that something needs to change about the culture that is responsible for the problems of hate and racism and the misguided aggression of some white police officers and white males in this country.

If George Floyd was put in the passenger side of the police vehicle as the video shows that he was near, this incident probably would never have happened. But the minute that he was out of sight from any video in the back of the car, is when Officer Derek Chauvin created in his mind that he was going to kill George Floyd with the world seeing his actions live.

The senseless death of George Floyd at the knee of Chauvin showed the arrogance of some white men who are in power. Chauvin wanted to send a message through Floyd that this is what happens to Black men when you cross a white cop in communities like Minneapolis and other cities around the country.

The excruciating pain that George Floyd must have felt for 8 minutes and 46 seconds is an internal memory for everyone as they helplessly watched in person and through news stations around the country and were  in disbelief that this could happen in 2020.

On June 3d, the country learned that the other three officers involved in the death of George Floyd were finally charged with aiding and abetting in the case along with Chauvin, who is now charged with 2nd degree murder. The other officers were, Thomas Lane, J.A. Kueng and Tou Thao.

Through heavy and constant protesting around the country, it took the Attorney General Keith Ellison in Minneapolis nine days to bring charges of aiding and abetting to second-degree murder for the other officers involved.

The chaos that was created by the firestorm of George Floyd’s death, was caused by  agitators posing as peaceful protesters who began burning police cars in the vicinity of protest marches with the ill-advised decision to loot businesses in every part of Philadelphia and especially in West Philadelphia.

We toured 52nd Street between Walnut Street and Sansom Street and we saw several businesses that were ravished by looters and some that they tried to burn down. We then talked to Muhammad, who owns one of the hut carts along 52nd Street that was overturned.

“I was not here,” said Muhammad,. “I saw the news but I came out a day later and nothing was in the hut, it was empty.”

The negative actions of some protesters who looted and ransacked businesses in West Philadelphia were more than likely from that neighborhood in which they live, and that’s the sad part of the devastation of the businesses in the wake of the negative influences of protesting.

“Right now, everything is nice,” said storeowner Muhammad Hassin. “I’ve been here with my two stores (Suny Cleaners and R.K. Boutique) at 138 and (Variety Store) at 136 S. 52nd Street between Walnut Street and Sansom Street. I’ve been living here for 23 years and I also live in this neighborhood. I never seen anything happen here but when I saw my businesses on the news being looted, it broke my heart.”

We also talked to residents in the neighborhood about the effects of looting and what they now have to do to get the essentials for their homes as they manage their lives, health and the death of George Floyd through this time of coronavirus.

“I been living here for 25 years,” explains resident Thomas Weldon. “Man it’s terrible. Destroyed this stuff by looting these businesses here on 52nd Street. Tearing up the city has nothing to do with George Floyd’s death. And tearing up the ShopRite, now we have nowhere to get something to eat at.”

“It’s difficult to me because I live on Irving Street (near 52nd Street),” says Mrs. Harriston. “My daughter just came down to take me shopping. It was really difficult to see the looting on the news. I started crying because this is our neighborhood. We go shopping everyday in these stores and now they don’t have nothing and nothing to go to now.”

It was an emotional and deep loss for these store owners and residents, because this malicious behavior by others has cost a community the economic heartbeat that everybody depends upon their faith in humanity is being tested  in the “Land of the Free and the Home of the Brave,” because they’ve all been touched by the rage, anger and ugliness of America.

In my opinion, if we had called “The Violence, Systematic Racism and Economic Inclusion Act of 2020” enacted in every state, many of these issues would be addressed and slowly eradicated,  because then everyone would be given a copy of the law to post openly in their homes and it would be taught to their children about hate and discrimination.

Another equally important important step would be establishing a department named the “U.S. Department of Hate and Race Relations.”

And in order for the sincere conversation about racial equality in our country can began, secrecy, discretion and discrimination has to give way to transparency in order for healing and real change to begin.

Now, Mayor Jim Kenney and Gov. Tom Wolf are both implementing new programs to address the concerns of African-Americans and people of color. It took a knee on the neck of George Floyd for America to start taking its knee off of minorities in our country.

Editor’s note: Since this commentary was written, the Parkside and Fox Street ShopRite stores have reopened.