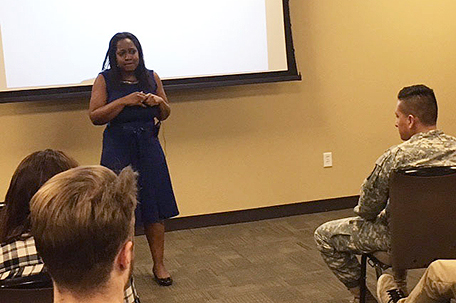 On March 8, I made history as the inaugural speaker for Texas A&M’s journalism department’s series on race.

The day included me giving 3 lectures and speaking to journalism students, who for the most part, may not have much interaction with African-Americans. My job was to teach students how to approach writing without bias.

Amidst recent racial incidents on campus and being a Black woman visiting a state where open carry of guns became legal in January 2016, I must admit there were some concerns. I wondered in a school where the student population is 3% African-American, if these students would even feel what I said to be important.

By happenstance, there was already a campus talk on race relations scheduled the day I arrived. I was not able to attend due to my itinerary but it was clear the students and university wanted to distance itself from the hateful incidents that triggered the dialogue. It is important to note that the persons who did the racial intimidation were not Texas A&M students.

My first task opening up my lectures was to be up front—every human being has a bias. The world we live in has socialized us to look at one another as “the other” –whether the other is based on gender, race, class or something else. The definition of “the other” is fluid.

To demonstrate the power of media and the danger of bias in reporting, I asked the students which demographic makes up most of the persons on welfare. Some responded outright: minorities and Black people.

Some were surprised to find out that most of the persons on welfare are White.

Some of the students were also surprised to learn that White persons are actually the minority on this planet. Since the beginning of humanity there have always been more persons of color from different ethnic backgrounds than of European or White descent.

I can not fault these students for their ignorance on these issues. The media sends messages daily through news coverage and images that Whites are the norm, the majority and the standard. Persons who are non-White are often niche stories, covered for purposes of portraying stereotypes and to reinforce that non-white is not the norm.

There are many examples in history where media was used as a propaganda tool to create hate towards groups of people resulting in genocide and sometimes war. We can not ignore media’s powerful role in socializing people to hate. Hitler used it as a tool to commit his atrocities and here in the US the examples are too numerous to how the media plays a part in the genocide of African-Americans by confirming stereotypes and stirring up White fear—Let us not forget Black Wall Street.

During the presentations I shared some of the shameful bias-filled national headlines describing the victims and survivors of Hurricanes Katrina and Rita.

I shared the Associated Press headline with an unflattering first paragraph describing survivors of Hurricane Katrina:

The last 300 refugees in the Superdome climbed aboard buses Saturday bound for new temporary shelter, leaving behind a darkened and stinking arena strewn with trash.”

I shared another story where Hurricane Rita survivors were depicted in a more humane light referring to them as evacuees as opposed to refugees.

Despite the obvious contradictions in coverage descriptions, the students did not deem the story referring to Katrina survivors as “refugees” as offensive.

However, the students also were not aware of the history between mainstream media and communities of color.

After explaining the ugly history of mainstream media, and their inappropriate and often hateful depictions of African-Americans, the students’ views had changed. They realized how offensive and biased the coverage of the catastrophe had been.

• As journalism students they were not aware of the shameful and hateful history of how American media covers communities of color
• Many of the students were kids when Hurricane Katrina happened so they had no idea about the controversy the insensitive coverage created
• Some had no idea that many low income communities, mainly African-American, waited for days to receive assistance to rescue them from the rising waters from a broken levee
• Some students also had no idea that over 1000 persons died in Katrina’s aftermath due to the levee breach (the total death toll from Katrina is still unknown)
This was a teachable moment.

Had I not explained the history of media in America, and how it is unfortunately used as propaganda to socialize society to look at communities of color as “the other,” they would have committed the same infractions in their reporting.

In order to change how media reports and covers communities of color, all hands must be on deck to educate upcoming journalists on how to not only remove their bias from the story– but to know the dangers of what happen when bias is in it.

Monica Peters is a public speaker, veteran communications executive and Founder of Genius in Collaboration PR ™. For more information go to www.gncpr.com