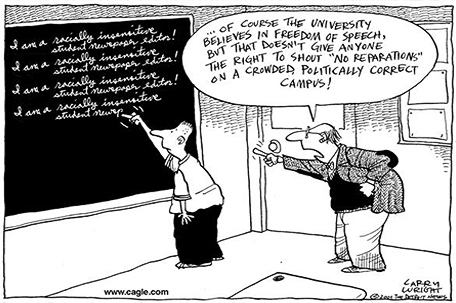 “We’re going to rebuild our inner cities, which are absolutely a shame and so sad. We’re going to take care of our African American people that have been mistreated for so long.” Donald Trump – June 7, 2016.

I have gone on the record attacking Republican Presidential Nominee Donald Trump for making bigoted and racist statements over the course of this presidential election.

However, when he says something that I believe to be of extreme importance because it acknowledges the plight of the African American community, I have a moral obligation to respond to that as well.

There are few influential Americans that acknowledged what Trump did on Tuesday, June 7th.  The United States government has issued a weak apology for slavery after much prodding, while the Congressional Black Caucus still can’t get a bill passed that will allow the American government to study what impact slavery has had on Black people. America has given reparations to groups on several occasions, but fails to see the social and economic damage that 400 years of slavery has done to Black families today.

Even today, when I listen to all the candidates “official” positions or platforms, issues affecting Blacks in cities haven’t been mentioned, something that Trump pointed out on one of the major media outlets. I then watched every newscast and listened intently to nearly every political pundit (Black or White) to see if any of them would follow up on what he said.

None of them did.

That, to me, speaks to the real bigotry and hypocrisy of the mainstream media.

Let me say that I am an independent when it comes to politics and fundamentally believe that both parties have shortchanged the Black Community! This is due in large part to a combination of the extremely poor political leadership Blacks have received over the years and a general failure to unite around a common economic agenda.  While we bear some responsibility, I won’t let America off the hook for the continuous atrocities plaguing Black families, children, and communities.

For far too long, the issues facing the Black community have not been on the “main stage” of American politics or the mainstream media. The two entities appear as if they don’t exist or have gone away; especially when we are so critical to the political outcome.  Let’s be very clear, for the most part, African Americans dominate in every “negative” demographic and nearly invisible in every “positive” demographic, both are legacies of American slavery and this won’t change by “pulling up our bootstraps.”

We have a number of issues that we must combat, but none of them is of greater importance than the resource gab that’s buried within the cash strapped cities that the majority of us live in.

I am urging all African American leaders and other like-minded people to unpack Trump’s statements regarding the bailout of our cities. That must be on the level of the billions we have given to foreign countries annually and the near trillion dollars that went to Wall Street.

I applaud Mr. Trump for taking this bold step.

This is not an endorsement of Donald Trump; however, I acknowledge his comment on the mistreatment of African Americans.