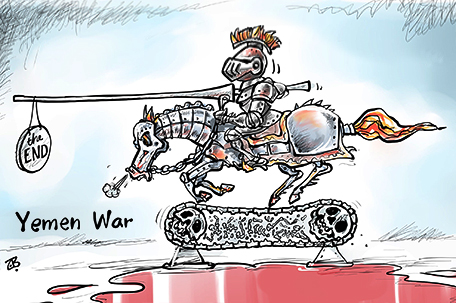 It might be a good idea for someone to tell President Donald Trump that the soldiers he sends out into battle aren’t made of plastic and can’t be bent back into shape.

Because he seems like the type, my guess is that President Donald Trump, like many men his age, had a tub of plastic, green Army men that he used to play with as a kid.

When you watch television shows based in the 50s, the time period in which Trump came of age, you see young boys setting up battles with their Army men and preparing for them to fight each other. Over time, especially if you played with the Army men every day, some of the men would get a little dinged up. Some would get bent.

But since they were usually made with plastic, and plastic doesn’t take much to bend back into shape, fixing the bent Army men didn’t take much. Sure, you had a few that were too damaged to be repaired, but for the most part, these Army men were pretty resilient.

I thought about this as I read about President Trump’s first military adventure, the raid on Al-Qaeda in the Arabian Peninsula and attempted capture (or death) of the group’s leader Qassam al-Raymi in Yemen. More than a few things went wrong there, and because of that, al-Raymi is showing us what petty looks like when it’s done by a terrorist.

But al-Raymi’s pettiness aside, I think that this incident shows that it might be time for someone to remind the President that these soldiers didn’t come out of a plastic container.

And unlike your tub of Army men, bending them back into shape may be impossible.

On Jan. 29, SEALS went into the AQAP compound in Yemen to try and get al-Raymi and bust up the al-Qaeda cell. Unfortunately, the SEAL team found itself dropped into a reinforced al-Qaeda base, where it was met by landmines, snipers and heavily armed fighters.

U.S. Navy Seal William “Ryan” Owens and 30 others, including the 8-year-old daughter of Anwar al-Awlaki, a militant killed by a drone strike in 2011 were killed in the raid. Two Airmen were also injured when the plane they were using to get the SEALS out was forced to crash land after taking fire.

A lot didn’t go the way it was supposed to in this raid.

But it’s the reason that things went wrong that’s causing a lot of people to be more than a little bit angry, including yours truly.

According to the Reuters news service, President Barack Obama discussed the possibility of sending a SEAL team into Yemen before he headed out into a new life of kite sailing with mogul Richard Branson.

Because he didn’t think that there was enough on the ground intelligence, Obama decided to take a pass. If things change, he said the new administration can take it on.

That Trump, a man who is still on the campaign trail despite actually being president for the past three weeks, would send a group of Navy SEALS into a situation without that additional intelligence is mind numbing.

We’ve also found out what a petty terrorist looks like. Since al-Raymi managed to avoid the raid, he was able to grab the mic and give Trump a new name, “the fool in the White House. Seeing as Trump spent most of the campaign telling people that he was smarter than the generals when it comes to terrorism, that’s gotta sting.

But what should anger every American who claims that he or she supports our men and women in uniform is how cavalier it appears Trump was when he ordered this raid.

As someone who has watched loved ones sent into harm’s way, I believe that the only folks who think that sending someone to war is as easy as buying a box of cereal are folks who have never been sent into one.

Trump, like a lot of the chicken hawks who have sent far too many people into harm’s way without the proper equipment, intelligence or anything else, managed to avoid being drafted for the Vietnam War through the use of four deferments, including one for, and I’m not kidding here, bad feet.

Thanks to those deferments, Trump never had to deal with any of the messiness of war. He’s never had to sleep with one eye open, wondering if the next bomb will be the one that takes his life. Or wait at a Veteran’s Administration hospital as he’s being fitted for a prosthetic arm. Or deal with Post-Traumatic Stress Disorder.

Trump has never had to worry breaking out in hives, or worse yet, dying from the cancers that can come with the chemicals we use to fight wars.

But my late father, and by extension my family, my friends, and everyone who loved my Dad, had to. So to me, this is personal.

During the Bush Administration, when only one of the two wars that we were in made any kind of sense, I remember saying to anyone who would listen that we need to consider the families of those impacted by our military misadventures before we begin them. While Bush might have stretched our military thin, he didn’t go of as half-cocked as Trump did on this one.

My hope is that the next time he exercises his Commander-in-Chief power, the new president listens to those in the know and remembers that the young men and women dressed in camouflage didn’t come out of a bucket and can’t be put back together with glue.

But considering the fact that thoughtfulness hasn’t been a big part of what I’ve seen from this administration in the last three weeks, I’m not optimistic.

Guest Commentary: Why African-Americans should care about Aleppo