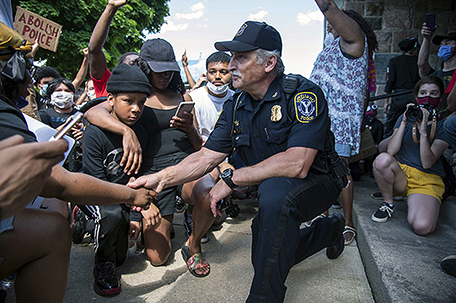 ABOVE PHOTO: Ypsilanti, Michigan Police Chief Tony DeGiusti shakes hands with a protester while taking a knee with demonstrators in a moment of solidarity during a police brutality protest in downtown Ypsilanti, Mich., Saturday, June 6, 2020. ( Jenna Kieser/Ann Arbor News via AP)

In six days and nights of protests across America in response to the death of George Floyd in Minneapolis police custody, journalists have been assaulted, harassed, pepper sprayed, shot with rubber bullets, and arrested on live TV. The volume of incidents and their increasing severity have led some to suggest that President Trump’s anti-media rhetoric may have triggered the violence.

The reality is that aggressive, militarized policing across much of the country, combined with a growing number of protesters who are hostile toward traditional media, has made covering protests an increasingly dangerous assignment. While we have not recently seen anything on the current scale, this is a reality that existed prior to Trump’s election.

At the Committee to Protect Journalists, we observed this dynamic in Ferguson, Missouri, after protests erupted in 2014 following the police killing of Michael Brown. In the course of a week of demonstrations, at least 11 journalists were detained. Reporters were harassed or pepper sprayed by the police; others were attacked by protesters. Journalists were also arrested while covering the Standing Rock protests in North Dakota, which began in April 2016, and during the Occupy Wall Street protests in 2011.

Over the last decade, police across the country have come to rely on military tactics and equipment, including Humvees, much of it repurposed after the Iraq War. In confronting protesters, police use highly aggressive methods, including kettling, a technique that involves channeling protesters (and sometimes journalists) into a confined area where they are detained and sometimes arrested.

Compounding the risk to reporters is the breakdown in their relationship with local law enforcement. Historically, police have had sustained interactions with beat reporters for local media who were provided with credentials they could use to cross police lines. But the decline in local media, along with the expansion of freelancers and bloggers, has made it more difficult for the police to identify who is a journalist and who is not.

The response by the police is too often to arrest those who say they are journalists. In most cases, they are later released after their credentials are verified; still, a number faced prosecution.

CPJ and others have also documented a series of attacks by protesters against journalists covering demonstrations. The dynamics here are harder to parse, but journalists with whom CPJ has spoken describe hostility across the political spectrum.

Physical attacks tended to come from the extremes: Antifa protesters assaulted journalists at a demonstration in Berkeley for taking photos, and white nationalists brandishing a shield assaulted a reporter covering a 2017 rally in Tennessee. The verbal harassment, however, emanates from a wider variety of protesters who often express deep-seated frustrations, including a sense that traditional journalists don’t understand their experience or represent their views fairly.

In early 2017, CPJ and the Freedom of the Press Foundation established an online database, the US Press Freedom Tracker, to document press-freedom violations in the United States.

Now that protests have returned with a vengeance, the numbers are off the charts. The Tracker is seeking to verify and document nearly 150 separate incidents, from New York City to Las Vegas, including dozens of arrests and a number of attacks on journalists carried out by police that appeared premeditated and deliberate.

For example, a Reuters journalist, Julio-Cesar Chavez, and his security advisor, Rodney Seward, were struck by rubber bullets while covering the protests in Minneapolis on Saturday night despite being clearly identifiable as members of the press. (CJR’s Jon Allsop recounted a number of additional incidents.)

While Trump didn’t make covering US protests dangerous, he has made the situation worse. It is certainly possible that the president’s anti-media rhetoric has emboldened local police, who are attacking and arresting journalists at a pace not seen in recent history. And it is also possible that some protesters who have attacked journalists are Trump supporters motivated by his denunciations of fake news. But the fundamental dynamic is a local one.

If journalists and media organizations want to confront the violence, they are going to have to engage with police departments across the country. The Reporters Committee for Freedom of the Press is planning to do just that, mustering a coalition to send a series of letters to police and law enforcement agencies around the US. The National Press Club has also sent an open letter to law enforcement, with the backing of leading press freedom organizations.

Governors, mayors, and national political figures who support press freedom must speak out, defend the rights of journalists, and demand that police officers who have abused their authority be investigated and prosecuted, if warranted. Media organizations must make sure that journalists have the latest guidance and support to cover the protests safely.

On Sunday, Reuters General Counsel Gail Gove sent a sharply worded letter to the mayor and police commissioner in Minneapolis, noting, “Unless journalists can safely report the news, First Amendment freedoms are meaningless.” Covering protests and demonstrations is vital, both in order to inform the public about the demands of the protesters and also to hold officials accountable. Journalists can’t do that job without the respect of the public and the support of local law enforcement.

Joel Simon is the executive director of the Committee to Protect Journalists, and the author of “We Want to Negotiate: The Secret World of Kidnapping, Hostages and Ransom.” For more information about the organization, visit: www.cpj.org.

U.S. police have attacked journalists at least 140 times since May 28