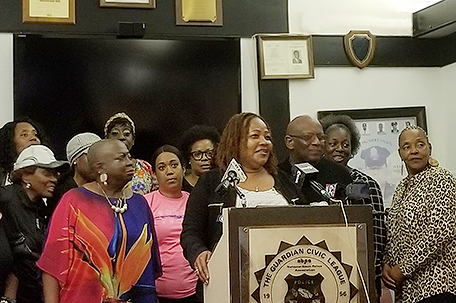 ABOVE PHOTO:  Guardian Civic League president Rochelle Bilal, flanked by several women and one male colleague, speaks to reporters during a press conference held on October 10 about systemic abuse of women within the City’s institutions.  (Photo courtesy: Amy V. Simmons)

The Guardian Civic League (GCL) held a press conference on Wednesday to call attention to a recurring problem for professional women within the Philadelphia Police Department and other institutions within the city – a pattern of harassment, intimidation and retaliation from their male counterparts. GCL president Rochelle Bilal — flanked by several women and one male colleague — indicated that the conference was called in order to show solidarity and to encourage other colleagues to come forward.

The incident which prompted the news conference occurred on October 3, where a chief police inspector allegedly attacked a police captain during an arrest. Bilal said that the incident is endemic of a pattern of abuse toward women from some of their colleagues within the police department and in other City run institutions that has been going on for decades – abuse which she says must end.

“He physically assaulted her, and the department still stands silent,” Bilal said. “We are standing here today and are saying enough is enough.”

According to the official criminal police complaint filed last week, during a confidential narcotics initiative, the complainant, Captain Lavern Vann, who is an African-American and who works in the Philadelphia Police Department Narcotics Unit, was in the process of handcuffing a suspect found with narcotics on her person. Chief Inspector Anthony Boyle, the accused, allegedly attacked and assaulted Vann while she was handcuffing the suspect, grabbing and twisting complainant’s arms and wrists in a painful manner. Boyle allegedly twisted her arms behind her back, and then attempted to push her to the floor. This occurred in front of other members of the narcotics squad and other bystanders. Furthermore, the complaint states, Boyle had to be pulled away from Vann by other officers who were witnesses to the incident. Vann was taken to the hospital and an injury report was completed. Due to this incident, Boyle has been removed from his regular narcotics assignments and is on desk duty until further notice.

It is alleged that Boyle took this unwarranted action because he was angry with Vann related to a federal lawsuit against him.

Vann is a plaintiff in a federal civil rights lawsuit recorded as Frazier, Vann, Bryant v. Anthony Boyle, Raymond Evers, and the City of Philadelphia. The lawsuit concerns alleged falsification of police narcotics records in federal court and Pennsylvania state proceedings, including but not limited to police internal investigations and City of Philadelphia prosecutions.

The Guardian Civic League and the employees who were present at the news conference are currently discussing next steps with the organization’s lawyer. Whatever they decide to do to formally address these issues, Bilal said that they would do it together.

“To the women, you are no longer going to stand alone,” she said. “We are going to be standing with you all over this city.”

The Guardian Civic League was founded in 1956 by Police Officer Alfonso Deal, with the goal of building bridges between the community and the police. For more information, call (215) 763-0490 or visit: http://www.guardiancivicleague.net.