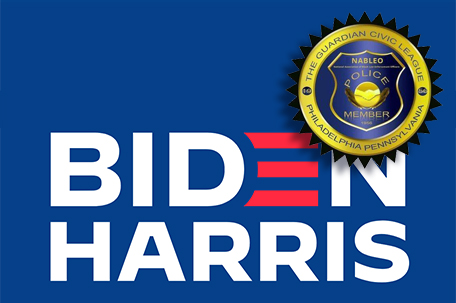 The organization is endorsing this ticket because they believe these two candidates are what is best for this country and their members. Both Biden and Harris have a track record of helping the community and represent an opportunity to do better as a country than what has been done under the current administration.

Recently, the National Fraternal Order of Police (FOP) endorsed President Trump’s re-election. This action has caused many members to have concerns about the leadership of the FOP due to past and recent circumstances taking place in this country.

“In this country of ours, we hold dear the opportunity and the right to vote for whoever we choose. I, as the president of the Guardian Civic League, strongly condemn the action of the National Fraternal Order of Police (FOP), because all of us that belong to the Fraternal Order of Police do not and have not endorsed Donald J. Trump for president,” Crystal Williams-Coleman said. “Simply put, the union is disregarding our concerns and our position on this candidate selection.”

As dues paying members, we deserve to have our voices heard as well in this decision,” Williams-Coleman continued. “The Trump administration has created a dangerous and hostile working environment for thousands of law enforcement officers around the country who work to maintain order and create positive relationships with the communities that they serve and protect. One thing that we must do is to ensure fairness and accountability for every person of color. We need to take away the hate and heal humanity. Our communities want justice, equality, and less suffering. We cannot move forward together with division; it must be with Unity.”

“Currently, I do not see unity as a sought-after goal, or principle of this administration,” Williams-Coleman concluded. “We do not endorse Donald J. Trump. Our voices will be heard on Tuesday, November 3 [for the] Biden/Harris ticket.”

The Guardian Civic League Inc. of Philadelphia, the local chapter of The National Black Police Association, was founded in 1956.