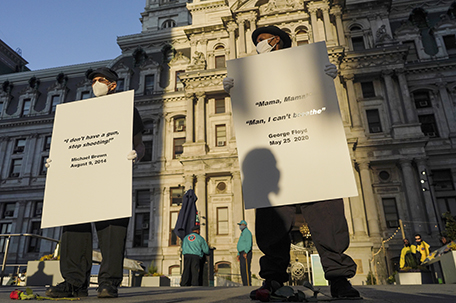 ABOVE PHOTO: People gather after a guilty verdict was announced at the trial of former Minneapolis police Officer Derek Chauvin for the 2020 death of George Floyd, Tuesday, April 20, 2021, at City Hall in Philadelphia. Chauvin has been convicted of murder and manslaughter in the death of Floyd. (AP Photo/Michael Perez)

While the verdict in the Derek Chauvin trial was welcomed news in Philadelphia, it wasn’t necessarily a time for celebration.

When the verdict in the Derek Chauvin trial in Minneapolis was read at about 4:45pm EDT on Tuesday, much of the City of Philadelphia breathed a sigh of relief.

But while there was relief, local police reform activists were quick to remind everyone that while the family of George Floyd had gotten some measure of justice, they may find themselves wondering, like the families of Walter Wallace Jr., David Jones, and Brandon Tate Brown, whether total justice is really possible.

Chauvin was convicted of second-degree unintentional murder, third-degree murder and second-degree manslaughter after a two-week trial. He faces up to 75 years in prison if given the maximum amount of time on each count. He’s currently awaiting sentencing in solitary confinement at Minnesota Correctional Facility-Oak Park.

Before the verdict was read on Tuesday, Philadelphia Mayor Jim Kenney and Police Commissioner Danielle Outlaw were preparing for how to handle protestors who took to the streets in a way that upheld both the law and civil liberties.

Instead, both expressed hope that despite the work that still needs to be done when it comes to the racism, intolerance and police brutality that ended with Floyd’s death, the long overdue process of healing could begin with this guilty verdict.

“The verdict doesn’t change the fact that [Floyd] should be alive today and should at this very moment be enjoying his family and his freedom,” Kenney said. “He was robbed of that by an officer who had sworn to protect and serve, but instead carried out a heinous murder.

So, in George Floyd’s memory, in his honor, let us make this our moment to change our future, to build communities of respect and understanding. Because Black lives matter—not just in words and in our thoughts, but in our actions.”

“After his death, the PPD, in conjunction with the Mayor’s office, worked on a set of reforms to improve police responses when using force and to improve trust within our community.

Although a verdict was reached today, I ask for calm. I ask for peace. Let us use this time to reflect on our justice system, what reforms have taken place, and the work still left to do.”

The work still left to do was on the minds of police reform activists and those who have called for the end of mass incarceration.

While they were happy to see that the Floyd family had gotten some justice, the Chauvin conviction is one of the few exceptions to a rule that has been left in place for far too long.

“We hope that Mr. Floyd’s family and friends can find some modicum of peace today, even though we know there is no way to ever fully restore their loss,” Philadelphia District Attorney Larry Krasner said.

“Now we must do our job and fight for transformational changes to policing and for increased accountability for officers who break the law. There is no time to rest.”

Toward that end, Philadelphians voted to revamp the city’s Citizens Police Accountability Commission in November 2020.

This replaces the current police commission and will be able to subpoena witnesses and access body camera footage from officers when force incidents happen.

“The jury came back with the only verdict that it could have,” Rev. Mark Kelly Tyler, senior pastor at Mother Bethel AME Church, said.

“It was an open and shut case.

The only way it could have ended differently is if the jury was filled with people predisposed to believe the police regardless of the evidence.”

But that said, there’s still a sentencing phase left to go. According to a senior federal prosecutor who spoke on background to the SUN, a combination of the former police officer’s lack of prior offenses and his age most likely means that the most that Judge Peter Cahill will give him is 20 to 25 years.

Or, due to public pressure, Judge Cahill could give him less,Tyler fears.

After the case went to the jury, the judge entertained a motion for a mistrial due to comments made by President Joe Biden and U.S. Rep. Maxine Waters.

Because Waters’ comments in particular called on people to never give up the fight for police reform no matter what the verdict was, Cahill expressed concern.

While the mistrial wasn’t granted, Cahill’s belief that Waters’ might have interfered with the process might help Chauvin out at sentencing, he said.

“We have to hit the “pause”

button on our rejoicing until we see the sentencing,” Tyler said.

“Despite the fact that the jury was sequestered, and what President Biden and Waters said probably had zero impact on them because they didn’t hear it, the judge could decide that Chauvin got a raw deal.

If we haven’t learned anything else from these cases, we’ve learned that when it comes to police defendants, things happen.

And even if he does get 20 years, will he do the time? Only then will we be able to say that justice was really served in this case.”

Chauvin is scheduled to be sentenced sometime in June.