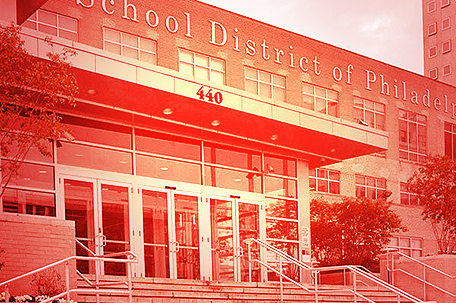 Part two of Groundhog Day… continues to answer the questions that will help understand the situation at Philadelphia’s embattled School District.

Will any of these funding ideas get enacted?

It’s hard to predict. Once Council gets back from summer recess in September, everything they do will be with the 2015 races for mayor and City Council uppermost in mind. Take the Use and Occupancy tax hike proposal as an example. Council upped the U&O tax in 2012 to help the schools despite fierce opposition from the business community. Is Council likely to do this during an election year when many members of the business community vote and contribute to their campaigns? We doubt it.

You said Mayor Nutter plays a crucial role too. Where is he in this mess?

The mayor hasn’t been as front and center on the schools’ crisis this spring as he seemed to be last spring. Nutter was against Council President Damen Clarke’s idea to split the sales tax revenue between the pension fund and the schools and is battling Council on other matters (including the sale of PGW to provide some pension fund relief). The discord between the executive and legislative branches has hurt the schools. Both Nutter and Clarke have been in Harrisburg to plead for more state funds – but they go separately rather than present a joint front.

When is Council’s next meeting?

Council officially goes back into session on September 11 – three days after the schools are scheduled to open.

Moving to the state. What is the School District seeking?

For the upcoming school year, School District officials want the state to contribute $150 million towards the $320 million total. (Remember, again: that’s $96 million for a skeletal education, plus $224 million for Hite’s “make all schools great” plan.)

And how much has the School District gotten?

Zero so far. That leaves $66 million still needed just for the skeletal education.

How much does the state already give Philadelphia?

You won’t find many people in Philly who do. How much money Harrisburg is obligated to provide to fulfill its state constitutional obligation to support “thorough and efficient” public schools is an explosive issue well beyond the scope of this HOW PHILLY WORKS. An answer may be coming though. Earlier this month, the General Assembly approved and Gov. Corbett signed a law to establish a Basic Education Funding Commission to study how state funds to public school districts are distributed and to recommend a new state funding formula. The Commission’s report is due no later than next June.

Will the schools get another $150 million?

The General Assembly is still in session. On the table is Gov. Corbett’s proposal to give the city schools an additional $10 million in education funding and pension relief and a $29 million grant for early childhood literacy. The state’s Budget Secretary says those funds are at risk because of the state’s own budget problems.

If the state controls the schools, doesn’t that mean more state dollars should come here?

That’s what lots of Philadelphians are saying. The chorus to return the public schools to local control is getting louder and louder. Expect to see a proposed Charter amendment expressing Philadelphians’ desire to eliminate the state-controlled School Reform Commission on the November 2014 ballot.

Where is Governor Corbett in all of this?

The governor is battling for a second term this year and, if polls are accurate, his reelection bid is in trouble. Corbett has been harshly criticized by his Democratic opponent Tom Wolf for cutting funds to public education. Earlier this year, facing opposition from the teachers’ union, Corbett cancelled his first visit to a city public school. The governor is more focused now on the state’s budget, rather than the Philadelphia public schools. He knows his likely votes are not in Democratic-heavy Philly anyway.

When is the General Assembly’s next meeting?

After finishing the budget and adjourning for the summer, the Senate goes back to work on September 15. The House’s online session calendar only goes through June. But don’t expect House members back until September either. (By the way, all House seats and one-half of the Senate’s seats are up for election this year).

Now the teachers’ union. What is the School District seeking?

For the upcoming school year, School District officials want the 16,000-member PFT to contribute $95 million in concessions towards the $320 million total. (One last time: that’s $96 million for a skeletal education, plus $224 million for Hite’s “make all schools great” plan.)

And how much has the PFT given?

Zero so far. That still leaves $66 million outstanding for a skeletal education.

Will the PFT respond?

No signs that they will. The PFT says its members are educators, not revenue-generators.  Also, its contract with the School District expired on August 31, 2013. Closing in on one year later, the PFT hasn’t agreed to any concessions.

What is the PFT being asked to give back?

If any new proposals are on the table, we haven’t heard them. As of last year, Superintendent Hite wanted steep salary cuts, a wage freeze through 2017, elimination of teacher seniority, reduced health benefits, a longer workday and less prep time, among other things. You can compare what the School District wants and what the PFT wants here.

Can the School District force these changes?

The SRC has asked the Pennsylvania Supreme Court to confirm its power to change work rules, including disregarding seniority in teacher assignments and imposing transfers and layoffs. The Pennsylvania Education Department supports these changes as “essential to the SRC’s mission of stabilizing the district’s finances.” The court has not ruled yet.

I guess the court action puts a damper on the School District and PFT contract talks.

PFT President Jerry Jordan says the School District, not the PFT, is to blame for abandoning contract talks. In a June 11 Letter to the Editor of the Philadelphia Inquirer, the complete version of which appears on the PFT’s website here, Jordan says any implication that teachers aren’t doing their part is “insulting.”

Will the PFT go on strike?

A state law prohibits the PFT from going on strike. If it did, the Pennsylvania Department of Education could revoke teaching certificates.

You’re right. This is complicated and hard to digest.

It is. And there are a number of important side issues we haven’t even touched on. For instance, how the School District ended up in such a financial mess in the first place. What steps are being taken to rein in expenses.  Why Council President Clarke wants City Council to have more fiscal oversight over how the School District spends its money. Why Council is angry over the speed (or lack of it) with which the School District is selling its vacant buildings. How the charter schools impact the city’s budget crisis. And to what extent the charter schools v. traditional schools debate fuels this crisis. The list goes on and on.

How can you stay up on what’s happening?

Look for more updates from www.seventy.org when new developments happen.