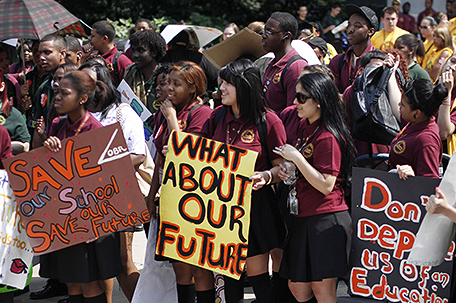 ABOVE PHOTO:  Students rally against proposed reductions in state funding for schools, Wednesday, May 25, 2011, outside City Hall in Philadelphia.  The School District of Philadelphia is asking the city for tens of  million of dollars more in additional funding as it deals with a massive budget shortfall that could mean the layoff of thousands of employees.  (AP Photo/Matt Rourke)

He was right on both counts.

Just in the nick of time, on the final day before heading out for the summer, City Council came through with borrowed city funds. The School District is still $66 million shy of what it needs just to provide a skeletal education for 200,000 public school students.

City Council is not solely responsible for the fiscal and academic health of the city’s public schools. State government and the teachers’ union also play crucial roles. As do Mayor Nutter and Governor Corbett.

The situation is emotional and complicated. Even gathering information for this HOW PHILLY WORKS   was tough. But we wanted to give you a single document that pulls all the details together to let you know where things stand at this moment with the city’s public schools.

Sadly, it was Groundhog Day just writing this.

How much money is the School District asking for?

Before Council ponied up more city dollars last week, the School District said it needed $320 million: (1) $96 million to maintain the current level of services (as inadequate as they may be) for the next school year, and (2) $224 million to “make all schools great,” which is the goal the District’s Superintendent Bill Hite set out in his February 2014 reform plan, which you can read here.

What happens if the School District doesn’t get the additional $224?

Here’s our best guess: The public schools will open in September. They will stagger through another year with not a whole lot of progress on Hite’s reform plan. When the city’s budget season rolls around next spring, the School District will be back in front of Council pleading for more money. And Council once again will come through. Council elections are held in 2015. It’s not a year to alienate voters or contributors.

Is more money really the answer?

Of course not. But no reform can even start without it.

Start with City Council. What was the School District seeking?

For starters, School District officials said they needed $35 million just to finish out this school year. For the school year that begins this coming September, School District officials asked the city to contribute $75 million towards the $320 million total. (Remember: that’s $96 million for a skeletal education, plus $224 million for Hite’s “make all schools great” plan.)

And what did the School District end up with?

The full $35 million for this year and $30 million in guaranteed funds for the upcoming school year. That leaves $66 million still needed for the skeletal education. (Keep the $66 million in mind as you go through the rest of this Q&A.)

I’m not clear on how it all rolled out in Council.

That’s what this part of our HOW PHILLY WORKS is all about. We’ll try to sum it up.

Don’t city taxpayers already give the School District a lot of money?

Yes. According to a School District report at the end of its last fiscal year (June 30, 2013), 35.3 percent of the School District’s annual budget comes from the city: around $870 million in local tax revenue (including 55 percent of property taxes, business use and occupancy tax, liquor-by-the-drink tax; a portion of fines from the state-controlled Philadelphia Parking Authority also go to the schools) and another $106 million in locally generated non-tax income.

How did Council come up with $35 million so the schools could finish out this year?

In one of its last-day-before-summer-recess moves, Council approved a bill to enable the city to borrow $27 million against future sales tax revenues to give to the public schools. The rest will be made up of proceeds from the School District’s sale of vacant public schools, which is expected to be in the neighborhood of $32 million ($11 million of this is already included in the School District’s budget for the current academic year so it’s not all “new money”).

And the $75 million the School District wants from the city?

In another last-day-before-summer-recess move, legislation was introduced in Council to authorize the city to borrow another $30 million for the next school year. Although a final vote can’t be taken until Council returns in September, the School District will take a leap of faith and “count” the money as in the door. City Council is also pinning its hopes on the General Assembly authorizing the city to impose a $2-a-pack cigarette tax hike, which could raise another $90 million annually for the schools. After the cigarette tax was approved by City Council last year, the state legislature didn’t act on it.

Why is Council pinning its hopes on a cigarette tax this year?

Council is hoping state legislators will throw them a bone in exchange for votes from the Philadelphia-area legislators on issues related to the state budget, which is still being finalized in Harrisburg. Council also hopes its recent approval of an extension in the city’s sales tax will remove a hurdle to the cigarette tax. In April of this year, a spokesman for the House GOP (the party which controls this chamber) said “there will be no plans” to enact the cigarette tax until Council approved the state-authorized extension of the city’s sales tax.

I thought Council DID approve extending the sales tax!

It did. Here’s a quick recap: In 2009, Philadelphia upped its sales tax from 7 percent to 8 percent to help the city through the recession. The increase was supposed to expire on June 30, 2014. To bring in annual recurring sales tax revenues of around $120 million for the schools, the General Assembly approved making the 8 percent sales tax permanent last June. Before this could happen, Council’s approval was required.

Council did not finalize its approval until this June. The delay was because Council President Darrell Clarke wanted to split the $120 million evenly between the public schools and the city’s dangerously underfunded pension fund. The General Assembly said this couldn’t happen. Clarke relented and agreed to make the sales tax permanent and give $120 million to the public schools for next year. Clarke still hopes the General Assembly will approve splitting the revenues evenly between the pension fund and public schools in future years.

Will any of the $120 million go towards the $224 million needed to “make all schools great?”

No. The School District was already counting on $120 million from the sales tax – which accounts for why the “skeletal education” request for the upcoming school year was lowered from $216 million to $96 million to begin with. The $224 million “make schools great” request is for additional funds.

If the schools will be back for more city dollars next year, is Council considering other ideas?

A number of ideas have been proposed that could result in recurring funds for the schools (keep in mind that the $30 million is a one-time infusion of borrowed money), although no action has been taken:

•Increasing the tax on commercial use and occupancy of real estate in Philadelphia (Use & Occupancy tax).

•Generating revenues from slot machines at the airport.

•Giving the School Reform Commission (the five-member, state controlled Board that oversees the city’s public schools) the power to collect the portion of abated property taxes that would otherwise go to the public schools.