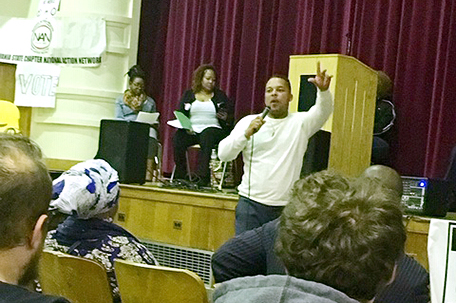 ABOVE PHOTO:  Rev. William A. Brawner from POWER addresses the audience.

Temple University Stadium Stompers protest grows larger in the quest to save the neighborhood from a stadium onslaught.

What started as many African Americans in North Philadelphia trying to keep Temple University from building a stadium in their community has mushroomed. “We Will Not Be Moved” is now a citywide movement cutting across race, ethnicity and neighborhood. This was never more evident than when the No Stadium No Deal Coalition met recently.

A diverse crowd of more than 200 scattered throughout the Carver High School of Engineering and Science auditorium, located at 1600 W. Norris St. on Tuesday for the session was hosted by coalition members the Stadium Stompers, the National Action Network’s Pennsylvania chapter, the Black Clergy of Philadelphia and Vicinity, the Philadelphia NAACP, the Guardian Civic League, and the city-wide faith-based group POWER.

“I have lived at 10th and Diamond 10 years,” said Jennifer Bennetch, whose two children Yusuf and Nafisa were standing up next to the aisle. “I moved to Philly 16 years ago and after moving to different places I now feel settled. It is terrifying to think I might lose my house and have to move. Things have gotten worst around here with the Temple police. They follow residents around, but say nothing to the dorm students who trash the neighborhood. We cannot even take our kids to the Ames Recreation Center. The last time I went by there, there were maybe three kids in the yard. We are just families who want to live a community we enjoy, and we do not want a stadium or more dorms.

Ruth Birchett is coordinator for the Heritage Homeowners Association. The organization was founded by neighborhood volunteers 30 years ago. Like Birchett, these volunteers have long histories in the community. 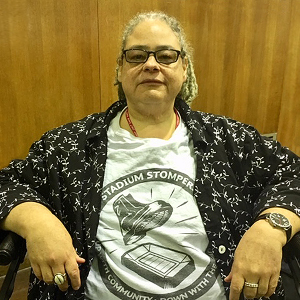 “I am a senior citizen and I grew up in this neighborhood and my family was here before that. My family still has the same phone number at our home that we had the day I was born,” she said.

Birchett said that neighbors are resisting Temple coming in and “bulldozing down our neighborhood” or expanding the university. She also said that she is horrified by the rowdy and drunken behavior of the Temple students.

“We want the gentrification to stop,” she said.

Wende Marshall came from Mount Airy to show support to the gentrification efforts going on around the city. Marshall works as an adjunct professor at Temple and serves on the Stadium Stompers steering committee.

“I see the gentrification taking place in Germantown and Mt. Airy along Germantown Avenue,” Marshall said. “It’s amazing how they will allow neighborhoods to decay and then say it’s their fault due to neglect. Then the greedy developers come in, sometimes saying they are rehabbing, then push the Black people farther and farther out. We have to stop the traction.” 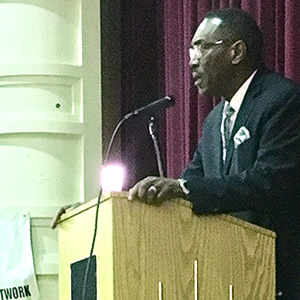 Phila. NAACP president Rodney Muhammad speaks at Carver H.S. of Engineering and Science for the No Stadium No Deal Coalition meeting last week.

In the welcome and opening prayer, Min. Rodney Muhammad, president of the local NAACP, accused the city powerbrokers of “social engineering of the population for profits.”

The Rev. William B. Moore, convener of No Stadium No Deal, explained why what started as a targeted movement to stop the building of a stadium in a local community attracted the attention of other groups in North, South, West, Northwest and Northeast Philadelphia who are also concerned about the negative ramifications of gentrification.

“This is the epitome of assault,” he said.

Eric Jenkins of Stadium Stompers explained the importance of homeowners, taxpayers, and concerned citizens around the city putting aside racial or ethnic identification to recognize that they are in the same boat.

Paula Peebles, NAN’s state chair, said that the “tax abatement must be abolished” because enables developers to sell to those who will ultimately displace current residents.

Retired schoolteacher Jackie Wiggins also explained why local neighborhoods should reject “carrots” given by developers like Temple’s offer for the Alpha Center. Wiggins then explained why the audience should encourage their City Council person to vote no on Bill 180100.

Before citywide updates on gentrification from around the city, POWER’s North Philadelphia representative the Rev. William A. Brawner, pastor of the Haven Peniel United Methodist Church, led the audience in a spontaneous chant of, “We will not be moved!”

The speakers then included Tiffany Green from Point Breeze, Atiba Kwesi who called for a moratorium on sheriff sales, Rochelle Bilal from the Guardian Civic League, and block captain Gail Loney, who explained gentrification and eminent domain.

“I came here to be a concerned observer,” said Tyrone Reed of Northwest Philadelphia. “I really want to hear what folks had to say and report back to the community. We must keep abreast of what is happening and taking place so we are clear on what needs to be done.”

Stadium Stompers regularly holds gentrification and displacement meetings at the Church of the Advocate, located at 1801 Diamond Street, every second and fourth Tuesday of the month. They are an organization that consists of North Central Philadelphia residents, Temple students and employees, as well as any Philadelphian who wants to join the fight for community preservation and self-determination.

Also, the Heritage Homeowners Association will hold their monthly meetings at the Amos Playground, located at 1817 N. 16th St., on Thursday, Nov. 8 and Tuesday, Dec. 4 at 6 p.m.