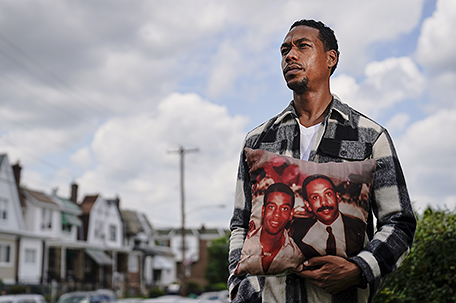 ABOVE PHOTO: Brett Roman Williams poses for a photograph while holding a pillow with a photo of his father, Donald Williams, lower right, and brother Derrick Williams who both were killed by gunfire 20 years apart, in Philadelphia. (AP Photo/Matt Rourke)

PHILADELPHIA — As Brett Roman Williams stood at the Philadelphia Medical Examiner’s office staring at a photo of his older brother’s face, a familiar feeling welled in his chest.

Williams’ father was shot and killed in 1996, when Williams was 11, and the ebb and flow of grief had washed over him for 20 years. But in 2016, when his brother was killed by gunfire, Williams reached out to a grief counselor for help coping.

Now, Williams serves on the board for the organization where he once sought solace, and he’s trying to provide that same kind of support to others. But the demand is far outpacing the supply of counselors because of spiking crime.

With more than 270 homicides in Philadelphia during the first half of 2021, the city has been outpacing the number of murders in 2020, when 499 people were killed, mostly from gunfire — the highest homicide numbers in more than two decades. The number of people injured in shootings has also exploded over the past 18 months.

Williams is chairman of the board for the Anti-Violence Partnership of Philadelphia, which provides counseling services to people affected by violence. He said there were 174 people on the waitlist at the end of June, compared with about 30 people at the same time last year.

“Hurt people, hurt people. And this is a pivotal moment in Philly, because there are a lot of people hurting in this city right now,” Williams said.

Executive Director Natasha McGlynn said that since September, the agency has provided counseling services to 425 teenagers who have lost family or friends, or who have themselves survived gunfire.

She said counselors are seeing layers of trauma and revictimization as gun violence increases.

Crime has been spiking nationwide after it plummeted in the early months of the pandemic, with many cities seeing the type of double-digit increase in gun violence that is plaguing Philadelphia. The Biden administration has sent strike forces to Chicago, Los Angeles, New York, San Francisco and Washington, D.C., to help take down gun networks.

Biden has encouraged states to use COVID-19 relief money to hire police or additional counselors. Philadelphia is one of 15 cities nationwide joining a federal effort to expand and enhance community violence interruption programs.

Williams’ group and others that provide counseling to victims are applying for grants to hire more counselors.

Lynn Linde, chief knowledge and learning officer at the American Counseling Association, said there was already a shortage of mental health professionals, especially in rural areas, when the coronavirus hit.

Add the economic, emotional and other losses from the pandemic and lockdown, and now waves of gun violence in small and large cities across the country, and Linde says most mental health professionals are stretched to their limit.

“Anecdotally, I don’t know anyone who has openings … and there are a lot of mental health professionals who are working extra hours and just burning out,” Linde said.

For the counselors at places such as Philadelphia’s AVP, who only treat people experiencing trauma and loss from violence, the rise in violent crime is the reason they are stretched thin.

There were more than 1,800 people wounded by gunfire in Philadelphia last year. As the hot summer months that typically bring more gun violence begin, the city has already reported close to 900 gunshot victims in 2021 — 150 more than the same time in 2020.

Adam Garber, executive director of CeaseFirePA, a statewide nonprofit group working to end gun violence, said people see the homicides above the surface, like an iceberg. All below the surface are the other effects of gun violence: the lifelong injuries, the trauma, the fear that forces parents to keep their children indoors.

“We are missing all the damage underneath that is permanently altering the lives of so many people,” he said.

Elinore Kaufman, assistant professor of surgery at the Hospital of the University of Pennsylvania and the Presbyterian Medical Center of Philadelphia, said there are two times to three times more gunshot survivors than fatalities at her trauma center. Survivors have increased as trauma treatment has improved.

“The goal is to help people to survive, and we’re very good at that part. We get people through that most acute time,” Kaufman said. “We are not as good at helping people get back to a full and complete life. That part is a lot harder in a lot of ways.”

She said the hospital is working on a program to provide patients with a peer mentor to help them connect to programs that offer help including counseling, applying for victims’ assistance or finding education and a new career if their injuries prevent them from returning to their jobs.

“We send people back to situations that were not safe to begin with. And they are traumatized and hurt and probably at a higher risk than they were in the first place,” she said.

Latrice Felix’s son, Alan Womack, Jr., chose to live in an upscale suburb of Philadelphia, spending most of his time at the gym or with family, in part to avoid the drama and violence he saw in the city.

But Womack, 28, was killed on Feb. 28, 2020, during a fight outside of his gym. Felix signed up for counseling at AVP shortly after her son’s death but was on the waitlist for about six months before someone had an opening.

Womack played Division II basketball at Fisher College in Boston and was a wellness fanatic, often training people at the gym. He would FaceTime his mother sometimes 10 times a day and come to Felix’s house to steal her “good bananas” or just to make sure she was doing OK. He wore nice clothes and cologne even to work out, his mother said.

Womack worked with young people who had been involved in the criminal justice system, attempting to steer them to better choices — something he did for many people in his life.

More than 1,300 people came to his funeral, including a friend from college who told Felix that when he was really struggling, Womack had let him sleep in his dorm room and use his meal plan card so he wouldn’t go hungry.

Felix has had a hard time with her son’s death. She doesn’t accept the police determination that the man who shot him was acting in self-defense, but there were no cameras in the parking lot.

While she waited for counseling, she shared her grief with friends, and discovered that she knew 20 people who had lost their children to gun violence in and around Philadelphia in 2020. She’s working to raise money to start a “grief cafe” — a place where people who have lost someone can come and talk about their loved ones, and where they can talk to a therapist.

“People think you bury your child and life goes on. But they don’t see how sometimes you can’t get up out of bed, how you start crying when you’re driving down the street for nothing,” Felix said. “We don’t have an outlet. I want to normalize counseling, especially for the African American community, and provide that outlet.”