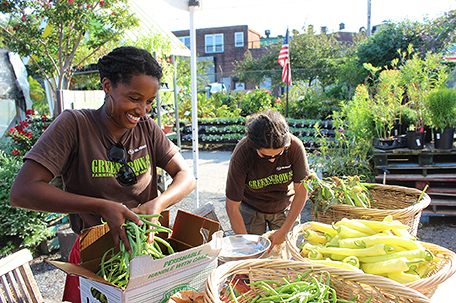 Bringing together her passions of farming, healthy eating, sustainability, and building community was not originally part of Mary Seton Corboy’s original business plan when — along with then-business partner Tom Sereduk — she decided to relocate their for- profit hydroponic lettuce farm from rural Pennsylvania to a former industrial site in Kensington in 1997.

However, Corboy did not want to be yet another gentrifying pioneer reclaiming the urban landscape, but part of a viable community partnership where her working farm benefited all the area’s residents. The result of her expanded vision is Greensgrow –a non-profit urban farm and local food distribution center in Kensington with over 30 employees.

Mary Seton Corboy—who died last summer— was as direct as she was driven, according to her colleagues. 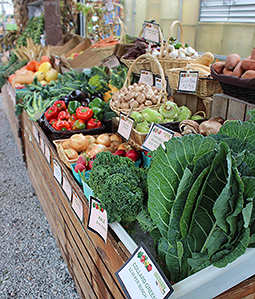 “I knew Mary very well. We were very close. I started at the bottom as a farmer when it was a core person operation, and I’ve been around to see it grow to support 40 employees. She yelled at me for two years, pretty much nonstop,” Ryan Kuck, long time staff member and current Greensgrow West program director recalled, laughing.

“She was very headstrong, irascible, opinionated — but she was also incredibly loving and caring. You couldn’t help but love her; even when she was yelling at you, you knew she cared. It’s the reason why I am still here after 10 years. The reason the staff has stuck around is that she created a culture where everyone had a place at Greensgrow- not just staff, but the community as well. If somebody didn’t feel welcome, she created a program for them,” Kuck said.

David Prendergast, farm manager for the Kensington location, remembers Mary as a spirited, hard worker as well. The takeaway is that she was a force….for everything. She loomed large, and her spirit can still be felt.

“She liked to challenge of ‘every day, nothing the same’…I sometimes felt like I was married to her because I saw her more than anyone else,” he said with a chuckle. “Her goal was to be here [at Greensgrow Farm]. This was her goal, her life, her baby, her whole family…the more she was around here, the more energy she got[even until the end].”

Philadelphia Magazine awarded Corboy as the “Philadelphian of the Year” in 2008. Upon the occasion, they stated, “Armed with a Blackberry and a sarcastic wit, Mary Seton Corboy is showing Philadelphia that the solution might be right beneath our feet.”

Their latest expansion—Greensgrow West— is located near the intersection of 51st and Baltimore Avenue in West Philadelphia. The new location, although considerably smaller than the main Greensgrow operation in Kensington—contains many of the programs and services found at the main farm. There is a fully stocked garden center—which delivers supplies to customers upon request—a small farmer’s market, outdoor workshop and classroom space.

With the support of owner Algernong Allen, Greensgrow West was originally located at the former site of Elena’s Soul Lounge at 4912 Baltimore Avenue before moving to its current location in August.

“We [Greensgrow] have embraced our role as a unifying presence in neighborhoods, something that has something to offer to everyone…we are a social entrepreneurship project, that is part of our value statement. We are located in between 51st and 52nd and Baltimore Avenue, half a block from 52nd Street, West Philly’s ‘main street,’ source of tremendous economic activity for generations…West Philadelphia has generations of gardeners; we are trying to reach those families, giving them support.

Kuck pointed out that flowers, plants, seeds, soil and other gardening products are big sellers for Greensgrow Farms, and at the new location, this is no different.

“In this neighborhood, there’s not even a Lowes or Home Depot to go to—you really have to travel—so being able to have somewhere that they can walk to or have deliveries from to help them do what they are already doing, that’s Greensgrow’s mandate,” he said.

Currently, Greensgrow is Philadelphia’s only garden center and production greenhouse, directly competing with the big box stores in the region.

It is paramount to Greensgrow that they serve the whole community – which includes longtime residents as well as those new arrivals through gentrification—with respect, excellent service, and quality products. Greensgrow also relies heavily on the surrounding communities to inform them about the products and services they want to see offered, embracing a village model.

[Part two of the Greensgrow story in next week’s SUN]

Down On The Farm