The Green Parade: Philadelphia Eagles fans lined the streets last Thursday to celebrate a Super Bowl championship that many fans had been waiting a lifetime for.

By Denise Clay
If there’s one thing that Philadelphia Eagles fans are recognized for, it’s their dedication.

Long before the players arrived at the NovaCare Complex to begin the team’s Super Bowl LII victory parade last Thursday, Eagles fans set up chairs, snack stations and other things designed to make the experience of sitting on Broad Street and the Benjamin Franklin Parkway on a cold day a little less daunting. 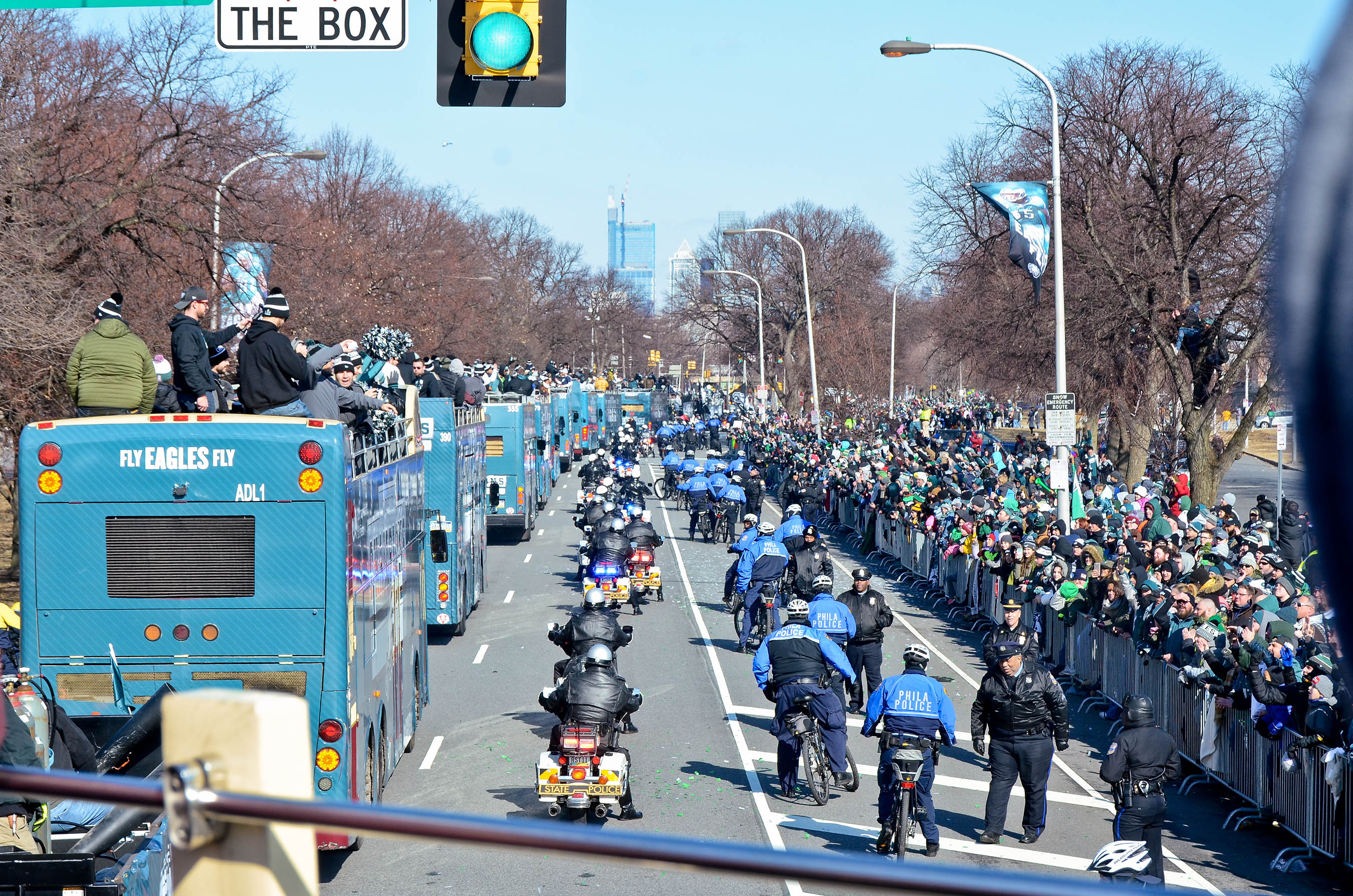 Among the fans at the Art Museum were Quinn Pedrazza of Pottstown, Sandra Ramos and Benito Diaz of Reading, and Zachary Lewis of Exeter. They had a really good front row spot with a good line of sight.

Because the group lives on what is usually a two-hour drive from Philadelphia, the day started early for them, Ramos said.
“We drove up this morning,” she said. “We got up at 3AM, left at 4AM and got here at 5AM. There was hardly any traffic.”
But being a part of a gathering that celebrates something the group had literally waited a lifetime to see was worth the trip.
Especially since it made the NFC East the only division in the National Football League in which all of the teams can boast of a Lombardi Trophy.

“We can sit at the table now,” Pedrazza said. “The rest of the division used to talk about their [Super Bowl] rings, and we couldn’t say anything because we didn’t have one. Now we do have one. We can finally say that we made it!”

Multiply that feeling of relief by several thousand, and you’ll get the feeling of the multitude of Eagles fans gathered along South Broad Street and the Benjamin Franklin Parkway last Thursday. Fans dressed in Eagles gear shouted themselves hoarse as the team rode through the streets armed with the Lombardi Trophy.

Ramon “Birdman” Evangelista of Camden had been on the Parkway with friends since midnight on Thursday. He has been an Eagles fan since moving to Camden from Buffalo, New York in 1986. 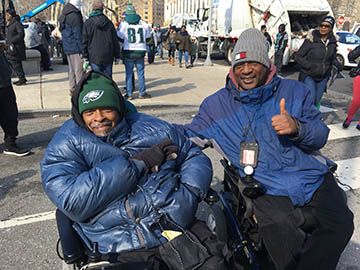 While it had been a long time coming, Evangelista never had a doubt, even when Patriots quarterback Tom Brady stood poised to make another comeback.

“I was hoping that our boys wasn’t going to relax and do like every else who relaxes and thinks they’ve got the game,” he said. “But I saw that my boys were resilient, and they knew they had to hold on. I knew they were going to win. I knew that Brady was going to have to do some miracle stuff, and it wasn’t going to be enough. We’ve been starving for this. We’re hungry. Our team was hungry.”
If you wanted to get any kind of business conducted anywhere in Philadelphia, last Thursday was not the day. All of the city’s public and parochial schools were closed, as were most of the city’s offices and businesses.

Among those taking the day off was the Eagles Fan-In-Chief, Mayor Jim Kenney. Before the team arrived at the Art Museum, he took time to shake hands and take pictures with fellow fans waiting to hear from their heroes.

While the Eagles Super Bowl win showed that they were the league’s best football team this year, it also showed that despite what some might say, activism and championship football aren’t mutually exclusive, Kenney said.

“This is a great win for the city because it’s our first Super Bowl,” he said. “But it couldn’t happen to a better group of guys. The team is very active in the community.”

Once the team arrived at the Art Museum, they bounded down the Art Museum steps to Philadelphia rapper Meek Mill’s “Dreams and Nightmares”, the song they had taken the field to throughout the playoffs.

Eagles owner Jeffrey Lurie saluted the fans…
“To the millions of Eagles fans here in Philadelphia, around the country and around the world, this is for you!”

…Coach Doug Pederson thanked the players…
“This is a special group of guys that I’ll always remember,” he said. “Get used tio this. This is our new normal.”

Dressed in a Mummers costume, Kelce entertained the crowd along the parade route by hopping off the team bus and shaking hands, doing some crowd surfing, commandeering a bicycle from a Philadelphia Police officer and taking a ride, and otherwise living not only his best life, but the best lives of several other people.

When he got his turn at the podium at the Art Museum, he gave a speech that reminded everyone of former Phillies second baseman Chase Utley’s 2008 World Series championship speech.

After breaking down just how counted out everyone from Howie Roseman to just about everyone on the squad was, Kelce told the fans that this group of underdogs wasn’t going to be denied.

“We were a bunch of underdogs,” he said. “And you know what an underdog is? It’s a hungry dog. We’ve had this quote in the O-line room for the last five years, ‘Hungry dogs run faster!’ and that’s this team. The bottom line is, we wanted it more. Everybody wanted it more, and that’s why we’re up here today.”

So as they made their way home from the festivities, Russell McClellan and Raymond Rayford reflected on the feast that finally getting a Super Bowl championship represents for Eagles fans.

“It’s special,” McClellan said. “I’ve been waiting for this my whole life. [This parade] turned out fabulous.”

“I am fabulously, gorgeously happy,” Rayford said. “This is going to last for a little while. The world is ours.”

SUN Sports writer Chris Murray contributed to this report.
The Philadelphia Sunday Sun’s coverage of Super Bowl LII was sponsored by Tyler Made Media LLC, producers of “Mark and Denise In The Mornings”, Monday, Tuesday and Wednesday mornings from 7am-9am on WWDB 860AM.

All 50,000 SEPTA Regional Rail passes sold out for Eagles Parade