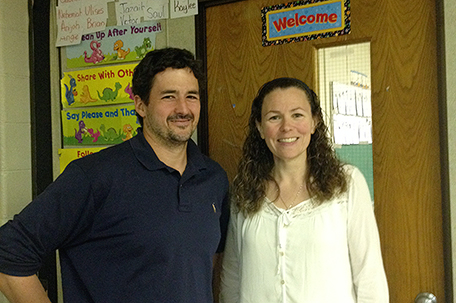 May 4, 2014 Category: Local Posted by: adminphilasun

ABOVE PHOTO:  Teacher Michael Sprandio and Principal  Sanchez of the Elkin Lewis School in Kensington.  (Photo by Kiarra Solomon)

As this year’s Gubnertorial election approaches, the topic of the Philly’s failing schools is getting hotter and hotter. Every day, more and more are weighing in on what the District needs. Unfortunately, while the School District is struggling financially, so are many of the parents who send their children to these schools every day. In 2012, every school in the Philadelphia School District satisfied the Federal definition of low-income school. That means that at least 30 percent of their students live below the federal poverty line.

One can only imagine the strain this puts on educating students in Philadelphia. Working in poorly maintained buildings, with very few materials, and amidst the recent decrease in staff and increase in violence against staff, the teachers, in this case, may actually have the answers. Very seldom, however, do we hear from those who are in the trenches, day after day.

Michael Sprandio, a first grade teacher at the Elkin Lewis School in Kensington is working hard to make a difference in his students’ lives, despite all the opposition. Poverty in the area surrounding the Elkin Lewis Elementary school is currently at 49 percent. More than 70 percent of the students come from single parent homes and out of close to thirty first graders in his class, nine have been diagnoised with behavioral issues. Yet, Sprandio’s students are doing much better than expected, progressing on target with their curriculum, despite limited funding, materials, and text books.

“It starts with discipline”, he said. “So many of these kids aren’t being disciplined. No one is watching out for them, so they think no one cares. My girls, I’m really protective of my girls.” Even the students who were serving lunch detention whispered secrets in their favorite teacher’s ear. He has become more than a teacher for his students, he is there leader, their protector, and friend.

In addition to teaching his first graders, Sprandio and his wife lead a running club as a part of Students Run Philly Style, in Kensington. He’s also authored a children’s book, ‘Dinosaur, Dinosaur’, and is currently writing another.

Elkin School is one of the few public elementary schools in Philadelphia that still has an art and a gym teacher, a guidance counselor, and provides students with access to technology in the classroom.  Yet Sprandio says even with all the support inside the building, the district is still in need of drastic change. He previously taught at Fairhill Elementary, which was closed by the District due to low test scores. Some of the problems he faces now are limited materials, which means some students even go without text books. Classrooms are now slightly over-crowded, and there is also limited support for students with behavioral issues, an area that most teachers are not trained in. Yet, in the middle of Kensington, despite all the odds, Sprandio’s first grade class is thriving.

Although he’s only been teaching for a little over six years, it’s evident that’s what generating success in his classroom is the investment he has in the neighborhood, and in his children’s success.  “They come back. They visit. The kids in our running group are currently training for a marathon. It’s the little victories that matter.”

Of one of his lunch time detainees Sprandio said “This kid gives me a challenge every day. But he also gives me a smile. If I don’t show up, he wins and loses. That’s why I show up.”

“Dinosaur, Dinosaur” can be purchased on Amazon.com