Gowns fit for royalty on display at ‘Threads of Africa’ exhibit 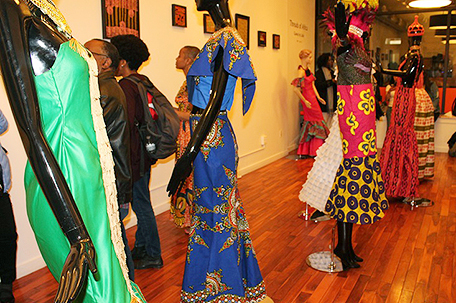 Walking through Art Sanctuary’s quaint storefront last Wednesday evening was reminiscent of a family gathering as folks were huddled close to each other to share comfortable conversation and avoid accidentaly hitting one of the many elaborate pieces on display.  Designer Breanna Moore spent a lot of time and energy putting the collection together and deserves to bask in praise as the pieces bear striking resemblance to the Vlisco designs most recently on display at the Philadelphia Museum of Art as part of its Creative Africa exhibition.  The ruffles and fans in some dresses directly echo the patterns seen this past spring so it is clear where the initial vision came from.

Global visibility of African clothing is important to Moore, which is part of the inspiration behind the textiles used in the collection known as LaBré’s “Fashion Made in Africa Initiative.”  In order for Moore to remain true to her cause, she teamed up with LaBré Bazaar designer Ami Yomekpe of Afro Mod Trends, Ghanaian designer Stephanie Melanie Owusu of Melanie Crane, and Togolese American accessory designer Dede Reelia Kouevi of Unique by Reelia to have their gowns and accessories showcased at the “Threads of Africa” exhibit.  Moore wanted to clarify the nomenclature of “African prints’ and what that actually means now the as the African print market is overwhelmingly void of African ownership.  Before the 1960s, every fabric sold in West and Central Africa was manufactured in Europe.  Are these fabrics that are rooted in European colonialism and not originally intended for African markets ‘African’?  Are these fabrics the result of cultural appropriation or neocolonialism?  These questions are challenged throughout Threads of Africa.

When entering the exhibit, onlookers were given the chance to both sponsor and win a prom gown from the collection.  This is important, as many young women will be looking for dresses soon and being able to pick something with style, class, and culture is key.  “LaBré seeks to ensure that young women who can’t afford a prom gown have the opportunity to enjoy their high school proms without having to pay hundreds of dollars for a prom dress.  A recent survey from Visa revealed that the average family plans to spend about $919 on a prom-going teen.  For every seven prom gowns sold, LaBré will donate a free prom dress to an in-need Philadelphia high school student who cannot afford a prom gown.”  In order to be eligible, young ladies must follow LaBré on social media and submit a 60 second video with #LABREPROM explaining their need by March 31, 2017. 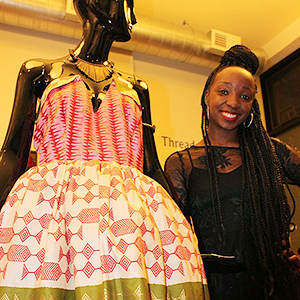 Breanna Moore and one of her creations
at the The Threads of Africa exhibit.
(Photo courtesy: Kendall Alexander)

While this collection is different from her everyday “get up and go” clothing, Moore wanted an elegant approach, so gowns seemed natural.  Her love for fashion grew after traveling abroad to Ghana twice as an undergraduate student at the University of Pennsylvania.  Seeing the fabric energized her to think about things from a business perspective and how fashion helps the economy move forward.  “The global fashion industry is $1.3 trillion with sub-Saharan Africa’s apparel and footwear market valued at $31 billion.  In Africa, the entire textile/clothing market accounts for the second largest number of jobs in developing countries after agriculture.  Fashion is also a natural resource of the continent.  It’s a material wealth that has the potential to contribute exponential growth to the economy through the cotton, textile, and garment industry and employ millions of people, predominantly women and youth.”

Moore doesn’t plan on ceasing progress at any point, as her future includes ownership in the fashion industry.  “Through the Fashion Made in Africa Initiative, I will create a consulting firm that achieves the stocking of African inspired apparel in U.S. boutiques and department stores. In [five years], I see myself owning several U.S. department stores that stock Made in Africa apparel, shoes, and accessories,” she said.  Be on the lookout for Moore as her name will be synonymous with African fashion in the years to come.  In the meantime, check out the Threads of Africa exhibit at Art Sanctuary, 628 S 16th Street open now through April 15th.