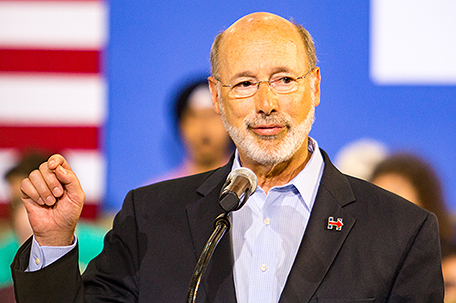 HARRISBURG, PA – In the wake of a weekend of bloodshed by individuals using legal weapons, Governor Tom Wolf on Monday reiterated his call for federal and state action to keep dangerous weapons from dangerous individuals. Wolf called on Senator Mitch McConnell to reconvene the United States Senate immediately to consider pending gun safety legislation passed by the U.S. House of Representatives. Further, Wolf said both the Pennsylvania State House and Senate should advance common sense reforms that would reduce access to guns for violent and dangerous individuals.

“The Tree of Life shooting made clear the imminent danger of hatred mixed with powerful guns,” Wolf said. “We saw the carnage up close and we know there is more that we can do. Unfortunately, as a country and a commonwealth, we have failed to address these dangers, or adequately respond to gun violence that plagues communities, large and small, on a day-to-day basis. There is no single solution, but there are certainly common sense steps we can take, on a myriad of problems, to reduce the likelihood and propensity of gun violence.

“The biggest and most immediate step that we could take as a nation is for the United States Senate to reconvene and pass House Resolution 8, a sweeping gun safety bill, approved by the U.S. House in February. Further, it is my belief that Congress should immediately pursue a ban or significant restrictions on assault rifles and ammunition accessories – those weapons of choice of mass shooters. I call on Majority Leader McConnell to immediately end the Senate’s recess and bring this bill to a vote. This is a nationwide crisis and it demands a national solution.

“Further, the commonwealth must also do more. I urge the House and Senate to address this issue. In Pennsylvania, as long as it is a private sale, any person can still buy an assault rifle to commit a mass shooting without a background check. We still don’t have a ‘red flag’ law that could get these weapons away from someone who was known to be dangerous. These are just two of many bills that exist right now to reduce violence. All of these bills have been stalled for too long.

“Over the past few months, my administration has been consulting partners and members of the general assembly on what more the executive branch can be doing to reduce gun violence and keep weapons from dangerous individuals. We want to ensure we are using the full weight of the executive branch to combat this problem.

“This is just the start. We should be passing measures to reduce violence by combating poverty and increasing opportunity for struggling communities. We should strengthen our hate crimes law and better target domestic terrorism and white nationalism. We should certainly invest in our mental health systems and combat the stigma and any barriers to seeking treatment.

“But we cannot limit our action to any one of these problems, either. This crisis demands swift but comprehensive reforms. We know what we are doing now is not enough. The status quo is costing people their lives and robbing many Americans of their peace of mind and freedom to live their daily lives without fear. We cannot accept this violence and fear as normal. We must take action.”