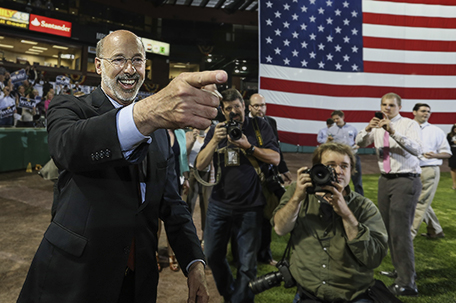 December 28, 2017 Category: Local Posted by: SUN Staff
Harrisburg, PA – Governor Tom Wolf announced on Wednesday that his administration has approved the return of Philadelphia public schools to local control. In a letter to the School District of Philadelphia, Secretary of Education Pedro A. Rivera approved of the district’s recommendation to dissolve the School Reform Commission (SRC) and rescind its designation as distressed.“Quality public schools are essential for our economy and our future, and the improvements made by the district in recent years have been significant,” said Governor Tom Wolf. “My administration has made public education a top priority and local control with strong state support will make the district stronger. Restoring district operations to a locally-selected board of education will only allow those improvements to continue, and will better serve the needs of the district’s students and schools. I commend Mayor Kenney, Superintendent Hite, and the administrators, teachers and parents of the Philadelphia school district for their commitment to improving public education in our largest city. I also want to thank the members of the SRC for their efforts and work over the years.”

The district was declared distressed in December 2001 by then-Secretary of Education Charles Zogby. The School Reform Commission was then established and became responsible for the governance of the district. Last month, the SRC adopted a resolution recommending to the Secretary of Education that the SRC be dissolved and that the declaration of distress be rescinded. The Pennsylvania Department of Education reviewed the recommendations and additional documentation received from the district and the City of Philadelphia.

“Over the past sixteen years, the District has overcome many challenges, despite the many difficulties facing public school districts all over the country and the limitations imposed on the powers of the SRC,” said Secretary Rivera. “After an extensive review, the Department of Education has determined that the district has made financial and academic improvements during the tenure of the SRC and the district no longer exhibits the factors that caused it to be placed in distress.”

In his decision, Rivera noted that the district and the city have developed an appropriate plan to transition control from the SRC to a locally-appointed board of education. Board members will receive training, attend SRC action meetings, and form committees to ensure a smooth transition when the SRC officially dissolves at the end of this school year.