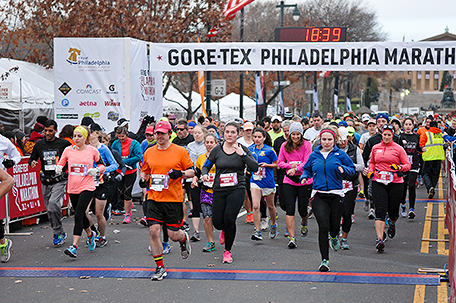 There was plenty of excitement among the crowd of more than 60,000 that lined the race course to cheer on a field of nearly 30,000 registered participants in the 2015 GORE-TEX Philadelphia Marathon and Half Marathon. The day was full of record breaking, including a new course record for the women’s Half Marathon set by Aliphine Tuliamuk-Bolton and a Guinness World Record-breaking Santa.

“This was a truly incredible way to end Mayor Michael Nutter’s eight years with the Philadelphia Marathon,” said Race Director Desiree Peterkin-Bell. “We can absolutely say that Race Weekend 2015 will be one to remember. It is always inspiring to see a runner break a record, and this year we had two!”

Today’s half and full marathons mark the close of the 2015 GORE-TEX® Philadelphia Marathon Weekend. This year’s marathon was especially important for runners looking for an opportunity to achieve a qualifying time for the 2016 U.S. Olympic Team Trials.

“Today the GORE-TEX® brand celebrates the human spirit and quest to achieve greatness,” said Kirk Christensen,  Running Footwear leader for Gore. “This weekend proved what an amazing opportunity the race was for the runners to demonstrate their human spirit and we were honored to be there, cheering them on and creating a community spirit mile after mile.  So to all the runners out there on Race Weekend, congratulations on seizing the moment, achieving your goals, and showing that you Own The Run!”

Men’s Full Marathon winner, Teklu Deneke of Ethiopia (currently living in Flagstaff, Arizonia) crossed the finish line with a time of 1:17:44. Coming in second was Kenya native Abraham Rutto, who lives in the Roxborough section of Philadelphia and completed his second Philadelphia Marathon today.

Gisela Olalde Granados of Herminate, Tennessee took home first place in the women’s Full Marathon with a time of 2:40:05. Philadelphian Margaret Vido, who clocked in at 2:44:40.

Another marathoner achieved a record-breaking performance today. Brian Lang of Philadelphia broke the Guinness World Record for fastest marathon run dressed as Santa. He ran all 26.2 miles in a Santa suit, hat and full white beard. Lang beat the current record of 2:55:53, crossing the finish line in 2:54:02. The new record is unofficial and still needs to be verified by Guinness World Records.