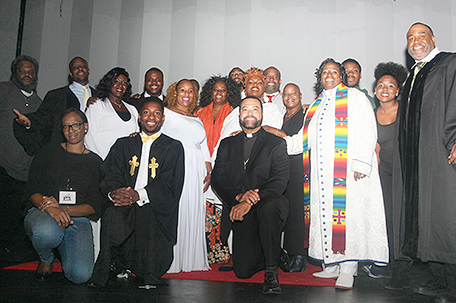 ABOVE PHOTO:  The cast of “God’s Trombones” with their director WDAS radio host Frankie Darcell. The play opened at The Penns Landing Playhouse on Friday, November 9th.  (Photo/ Robert Mendelsohn)

The 3-day theater production ran from Friday November 9 through Sunday November 11 at the Penn’s Landing Playhouse inside the Independence Seaport Museum.

The play is based on author and songwriter James Weldon Johnson’s (best known for his song Lift Every Voice and Sing) classic book of poetry “God’s Trombones: Seven Negro Sermons in Verse.”

The production was presented by Diva at the Stage Door productions, founded by Darcell in 2009.

The show opened with Darcell being honored by Councilwoman Blondell Reynolds Brown, who presented a citation from the City of Philadelphia with SUN publisher Catherine Hicks, who introduced the councilwoman.

One of the highlights of the play was a spirited dance performance by Philadanco D/2 dancers in the opening scene. The three performers wowed the audience with their graceful moves choreographed by Philadanco alumna Jamilla Toombs. 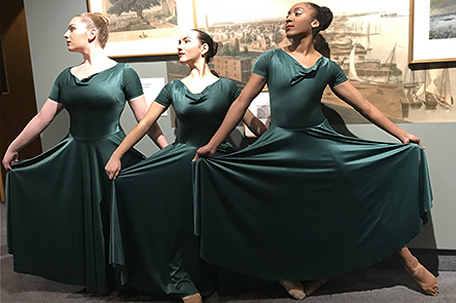 The singing and monologues showcased the phenomenal talent of the cast. The cast may be recognizable to many having starred in Darcell’s previous hit theater productions in Philadelphia, “12 Angry Men” and “For Colored Girls.”

“Several of the actors in this production I’ve worked with before and I personally invited back because of their incredible talent and commitment to the arts,” Darcell said in a previous SUN interview about the play.

With the stage set like a church pulpit, at times the production was a feel-good church service with performances that drew “amens” and more from the audience throughout the evening. Gospel singer and Philadelphia native Janae Brown performed the spiritual hymns that added to the allusion of a real church experience.

The grassroots production which depended heavily upon monologues was a tough act to pull off, considering the weight during many scenes were solo performances challenging the actors to keep the audience’s attention.

Some of the cast were new to acting, making their stage debut for the play although it was not apparent given the comfortability they exuded.

“2018 was all about making my dreams reality, stepping out on faith and pushing myself past my comfort zone, tonight shall be no different,” said cast member Dexter C. Stuckley, a journalist, blogger, producer, radio host and actor. In his stage debut, he performed the sermon “Noah Built The Ark: Pt.1.” on Instagram who delivered the sermon Noah Built the Ark: Part 1 in the production.

Cast member Pamela K. Williams, also known as Pastor Pamm, (the pastor of The Ark of Refuge Tabernacle of Philadelphia), sermons in the production were lively as she finessed the stage in a Sunday sermon-like fashion.

Other cast members included Ben Kendell, who played the role of “The Prodigal Son”, found a life in the theater after his retirement from practicing medicine in 2001.  John W. Frisby IV, a South Philadelphia native and established actor, author, playwright and poet gave the eulogy in the “Funeral” scene.

Ceshia Sheree (AKA Queen Phierce) is an actress, author, poet, writer and special-needs educator. She hosts a weekly radio podcast on Ayeeradio.com. Sheree recited the poem “Who Is She.” Aurica Hurt, an alumna of Temple University and Freedom Theater served as one of the narrators for the play. She is an actress, activist and community organizer. Francisco Joseph, a Philadelphia native, actor and writer performed the sermon “Noah Built The Ark: Pt. 2.”  Derrick Watson, a Philadelphia native is an actor, writer and poet. Watson performed the sermon “Noah Built The Ark: Pt.3”

Fatoumata Nanakasse, a West Philadelphia native, is an actress for independent films and commercials. This was her stage debut as a narrator. T.C., professionally known as “Storm E. Weather” is a multi-faceted performer, producer, director, radio and television personality, who has performed in over 50 stage plays. T.C. performed the sermon “The Creation”. Brandon Best, a Philadelphia native and graduate of Delaware State University made his stage debut performing the sermon “The Crucifixion.”

Dr. Jean Wright II, PsyD, is a clinical and forensic psychologist with over 20 years of experience in behavioral health. Wright made his stage debut performing the sermon “The Prayer.”

Saj Blackwell, known professionally as “Purple Queen,” is a radio personality on 91.7 FM and owner of PQRADIO.com. which houses 24/7 radio programing for 10 radio shows. Purple Queen made her stage debut as a “narrator” in the play. Gregory D. Simpson, a Washington, D.C. nnative served as the music director and currently teaches music to the “Youth of Global Leadership” in West Philadelphia.

If you were looking for a true gospel experience this play did not disappoint!

With more than 20 stage productions under her belt, what play will Darcell bring to the stage next? We can’t wait!

[SUN staff contributed to this review]