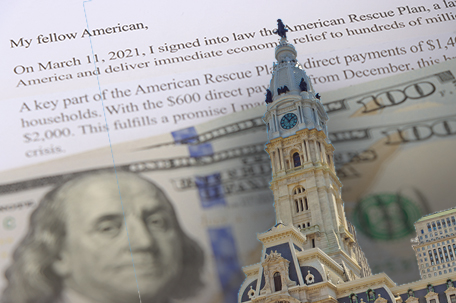 As the deadline to pass a 2022 fiscal year budget grows closer, the call to use more of the city’s $1.4 billion American Rescue Plan allocation to make a real, long-term difference grows louder and louder.

Because this is a column on Philadelphia’s 2022 Fiscal Year budget, let’s start with a number: 822. According to a report issued on Tuesday by Philadelphia City Council’s Committee on Children and Youth, that number represents the number of young people that were either injured or killed due to gun violence in 2020 while the world was under quarantine.

If you add young adults under 30, the number goes up to 1,898 shootings and 342 deaths altogether. Most of these young people live in just 10 of the city’s zip codes and many of the young people under 21 attended one of 25 schools.

While most things in the city budget were restored to pre-pandemic levels thanks to the American Rescue Plan that President Joe Biden managed to get passed and signed into law, one line item — violence prevention services — got an $18 million increase.

As a start, that’s not bad, Councilmember Kenyatta Johnson (D- 2nd Dist.), who is a member of the Committee on Children and Youth, said. But because he also chairs the Council’s Special Committee on Gun Violence, Johnson says it’s just a start.

“Philadelphians of all ages are telling me repeatedly that local government must do more things right away to have an immediate impact in reducing the violence in Philadelphia,” he said. “I commend Mayor Kenney for his initial investment, but I urge the mayor to invest more money in the budget to reverse the violence in our neighborhoods.  Philadelphians have the chance in the upcoming City budget to invest in effective short-and-long-term solutions to bring peace on our streets.”

So, at a press conference held at the Hawthorne Recreation Center in South Philadelphia, members of Council’s Committee on Children and Youth, community leaders, clergy members and members of council who agree that more needs to be put into our youth, got together and unveiled Philadelphia’s Youth Powered Anti-Violence Agenda.

When I came into the Hawthorne Recreation Center, I saw a small memorial with a sneaker, some flowers and a chalkboard that said, “Family Is Forever.”

It was a memorial which made talking about the findings of this report there make more sense.

Since March, members of the Committee on Children and Youth and other members of Council have been talking to young people, community leaders, organizations and anyone interested in making Philadelphia a place where young people can reach their potential.

Those discussions and research on children and gun violence led to the Youth Powered Anti-Violence Agenda and the recommendations it contains.

Among those recommendations are guaranteed youth employment, expanded youth programming, universal trauma counseling and additional supports and resources for students in the 25 schools that have been most impacted by gun violence.

The Committee is asking for $50 million. Now to you and me, that sounds like a lot of money. But when you look at the problem that City officials hope to solve with this money, it too is only a start, Councilmember At-Large Helen Gym, co-chair of the Committee on Children and Youth, said.

But when you consider the fact that Mayor Kenney’s $5.18 billion spending plan also includes $343 million in wage tax reductions, reductions that won’t necessarily benefit city residents, a way to get that $50 million is right in your face, Gym said.

“The American Rescue Plan brings an unprecedented level of resources to our city,” Gym said. “So, we’re not going to sit on the sidelines waiting for our turn while corporations, businesses get huge numbers of tax cuts, while the average Philadelphian gets 50 cents a paycheck for a wage tax cut. People want to see investments in their neighborhoods. They absolutely do.”

Now this isn’t the first group of people who have said that when it comes to this budget and the $1.4 billion in ARP money that the city has to work with, Mayor Kenney hasn’t been thinking long term.

City Council President Darrell Clarke is hoping that the Mayor will add a few more zeroes to the budget for the anti-poverty programs that would stop us all from having to refer to Philadelphia as the poorest city of its size in America.

Police reform activists are hoping that the new Citizens Police Commission will get the money it needs to start its work.

Heck, City Controller Rebecca Rhynhart has a list of things the city can do over the four-year term of the ARP that would cover everything from gun violence to opioid addiction to economic development.

While we can all understand that it’s a bad idea to start a brand-new program with one-time funds, that’s not what people are asking for here. Voters are asking for their money back, and that’s not too much to ask.

The deadline to pass the City’s Budget for Fiscal Year 2022 is June 30. It’ll be interesting to see if Mayor Kenney goes big… or goes home.