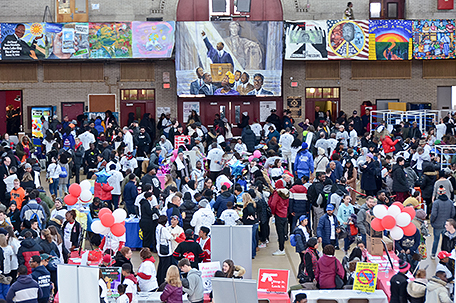 With the government shutdown serving as a backdrop, the Philadelphia area did its best to celebrate the birth of the Rev. Martin Luther King Jr.

Usually, the holiday celebrating the Rev. Dr. Martin Luther King Jr.’s birthday starts with the Martin Luther King Center for Nonviolence having a dignitary perform the ceremonial ringing of the Liberty Bell at Independence Mall, a symbol of the freedom for all that King advocated for.

But this year, the bell had to be rung at the Philadelphia 201 Hotel, shortly before the Center’s annual luncheon on Monday.

Why? Because the money needed to staff the Liberty Bell and keep it open wasn’t available due to the government shutdown.

The shutdown figured prominently in many of the activities that took place during this year’s Martin Luther King Day activities as city residents volunteered to do things designed to make the lives of furloughed workers like the ones usually staffing the Liberty Bell less difficult.

Much of that work was being done at Girard College, site of this year’s signature project. Mayor Jim Kenney, Gov. Tom Wolf, Lt. Gov. John Fetterman, Sen. Bob Casey and School District of Philadelphia Superintendent William R. Hite, Jr. were among those building Dreambooths and Dream Line banners designed to help young people focus on a world beyond gun violence, which was this year’s theme.

This was the 24th year for Philadelphia’s King Day of Service, the largest service-related observance of the King Holiday in the nation. In addition to the Girard College signature project, there were workshops, discussions and projects focused on ways to end gun violence as seen through the eyes of young people, Bernstein said.

About 5,000 people participated in 1,800 volunteer opportunities throughout the Delaware Valley.

The recipients of this year’s Harris Wofford Active Citizenship Award from the organizers of the Martin Luther King Day of Service were Ready, Willing and Able, a non-profit organization designed to help men who have have come through a variety of tough circumstances ranging from substance abuse to incarceration. The men are given transitional housing occupational training and work designed to allow them to press reset on their lives. About 59 percent of these men graduate and move forward to lead productive lives.

The program has been helping people in Philadelphia move forward with their lives since 1998, when the New York-based Doe Fund decided to bring a program that had been successful in the city.