Give It To My People 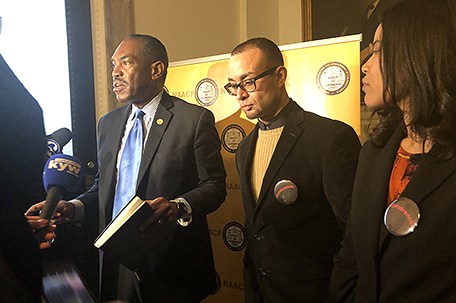 ABOVE PHOTO: Philadelphia NAACP President Rodney Muhammad (left) and Cara McClellan of the NAACP Legal Defense Fund (right) join Robert Holbrook (center), a plaintiff in a lawsuit filed in Commonwealth Court against the practice of “prison gerrymandering” or using prisoners to boost up the Census numbers of the places in which they’re imprisoned at the expense of the towns they’ll be returning to once they’re released.

The Philadelphia NAACP, the Legal Defense and Education Fund and four former inmates from Pennsylvania’s state prisons have filed a lawsuit to end a Census process that disenfranchises urban areas.

For 27 years, Robert Holbrook called a cell at the State Correctional Institute-Greene in Waynesburg, Pennsylvania home.

Holbrook had been sent there as a juvenile after being convicted of homicide when he was 16 and was there for 20 years. He was released in 2018, two years after the United States Supreme Court ruled that sentencing juveniles to life without the possibility of parole was unconstitutional.

During that time, the citizens of Greene County, where SCI Greene is located, benefitted from his presence when it came to the United States Census.

But Holbrook, currently the director of community organizing for the West Philadelphia-based Abolitionist Law Center, believes that wasn’t fair. And since he’s been out of Greene county for two years, he wants that to change.

It is for that reason, to help the City of Philadelphia get the resources that it deserves through a Census count that includes those incarcerated in the Commonwealth’s correctional facilities, that Holbrook is one of four plaintiffs in a lawsuit filed by the NAACP Legal Defense and Education Fund and the Philadelphia NAACP in Pennsylvania’s Commonwealth Court.

At a news conference held in Philadelphia City Hall on Thursday, Holbrook joined Minister Rodney Muhammad, president of the Philadelphia NAACP and Cara McClellan, assistant council for the Legal Defense Fund, to announce the lawsuit, which is also being joined by the Ballard Spahn law firm and student groups from Temple and the University of Pennsylvania,  and talk about systemic inequities that makes it necessary.

While Blacks make up only 10% of Pennsylvania’s population, they make up 55% of the population of the Commonwealth’s prisons, Muhammad said.

Because Pennsylvania considers you a resident of where you live on Census Day instead of your actual home for the purposes of the count, the residents of the largely rural, mostly White areas where these prisons reap the benefits of their presence, he added.

That’s good for areas like Greene County. But for Philadelphia, the place that many of these inmates will be returning to after their sentences are finished, it’s not only bad, but it’s been bad for a decade.

“This has drawn an enormous amount of resources,” Muhammad said. “It’s siphoning resources from the zip codes that these people were arrested [in], and prosecuted and taken from.”

But while the siphoning of resources is bad, the siphoning of political representation is much worse, McClellan said. Because Congressional redistricting relies on Census data, this impacts majority rule in some ways, she said.

“This prison-based gerrymandering has the effect of inflating the political power of the predominantly White communities and rural districts where most of Pennsylvania’s prisons are located, while diluting the vote and representational power of the mostly Black and Latino communities and urban districts from which most of the prison population originates,” McClellan said.

In fact, according to a Villanova University study on prison-based gerrymandering, if the Philadelphians in the Commonwealth’s prisons were counted toward the city’s population, the result could be a majority-Black congressional district, McClellan said.

While there is no date for the suit to be heard, the plaintiffs are seeking a declaratory judgement under the Pennsylvania Constitution before redistricting takes place in 2022. Should that be granted, the Commonwealth would have to base where inmates live on their actual addresses instead of the places they’re incarcerated.

Give It To My People