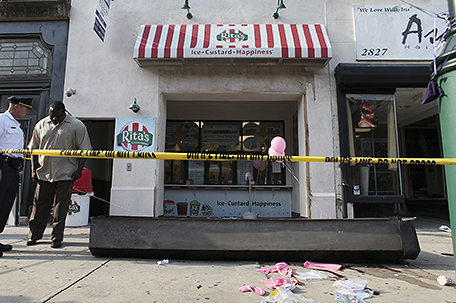 ABOVE PHOTO:  Investigators look over the debris of a fallen security door outside a Rita’s Water Ice store in the Brewerytown section of Philadelphia on Saturday, June 28, 2014. Investigators tell Philly.com that the metal security door detached and fell on a 3-year-old girl who died. (AP Photo/Joseph Kaczmarek)

Authorities are investigating how a metal security grate detached and fell from the facade of an Italian ice shop, killing a 3-year-old girl in front of dozens of people who tried to rescue her.

The girl, Wynter Larkin, was with her mother at the Rita’s Water Ice store in north Philadelphia where a fundraiser for a sorority and fraternity was underway Saturday when she was trapped under the falling grate, police and witnesses said.

Members of the Omega Psi Phi fraternity rushed to get the girl out from under the grate and give her CPR, witnesses said. The girl was taken to Hahnemann University Hospital, where she was pronounced dead.

“It took about 20 to 30 men to get that awning off of the baby,” witness Tracey Stanford told KYW-TV. “When they finally got it up off of her, she was just lying there, lifeless.” 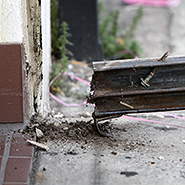 PHOTO:  A bolt from a fallen security door outside a Rita’s Water Ice store is seen in the Brewerytown section of Philadelphia on Saturday, June 28, 2014. Investigators tell Philly.com that the metal security door detached and fell on a 3-year-old girl who died. (AP Photo/ Joseph Kaczmarek)

Carlton Williams, commissioner of the Department of Licenses and Inspections, said in an emailed statement that there were no open violations at the store and no reported problems with its security gate.

“The Department of Licenses and Inspections will only inspect these gates upon report of a complaint of an apparent defect,” Williams said, noting that property owners are responsible for their maintenance, care and inspection.

Nevertheless, police Inspector Christine Coulter said the investigation was broadening to all other buildings on the block and, in particular, their security grates. But at this point, Coulter said, the incident appears to be “a horrible tragedy.”

The Philadelphia medical examiner’s office did not return calls and emails seeking comment Sunday on its role in the investigation.

Photos from the scene showed the black metal gate lying on the sidewalk, pink balloons still tied to it in front of the shop’s red-and-white striped awning. Several popped balloons appear trapped underneath the gate, which businesses typically roll down after hours to prevent crime.

“Our hearts and prayers go out to the child’s family,” said Linda Duke, a spokeswoman for Rita’s Italian Ice, the shop’s parent company. “Due to the current investigation we really cannot comment about the unfortunate incident.”

Teen Shop celebrates 25 years of teaching girls to have goals