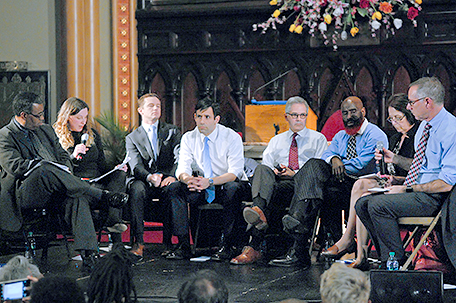 At Philly DA For The People’s Candidates Forum Tuesday night, those traditionally left out of conversations about Criminal Justice finally got their chance to speak.

As she sat in a pew in the Arch Street United Methodist Church for Tuesday night’s Philly DA for the People’s Candidate Forum, Rochelle Nichols Solomon of West Philadelphia listened intently as six of the eight people hoping to become Philadelphia’s next District Attorney shared their vision for the office.

On her lap was a notebook with a hand-drawn grid that had the names of the candidates present on one side, and the issues the forum had pledged to address, issues including mass incarceration, youth being tried as adults, cash bail, and civil forfeiture on top.

As she listened to the candidates, Solomon wrote down all of their positions. And she wasn’t alone. Many of those gathered at the forum, members of the activist groups sponsoring the debate, were taking notes.

With the current District Attorney under federal indictment and a national criminal justice landscape that’s changed in some pretty serious ways since January, picking DA Seth Williams replacement is probably the most important thing Philadelphians will do this year, Solomon said.

We have to get it right, she said.

“I think that everyone has a heightened interest in what is happening in our community, in our city and in our state,” Solomon said. “I think that the issue of justice and mass incarceration and all of the issues that are part of this platform that has been provided tonight are of critical importance. So I was listening, really listening hard and taking copious notes of where the candidates stand.”

“Obviously, candidates want to put on a good face,” Solomon continued. “So I will leave this forum and do some more investigation, although I’ve seen some of the history of these candidates and what they stand for.”

For two hours, six of the eight people vying to become the next DA — Teresa Clark Deni, Tariq El-Shabazz, Joe Khan, Larry Krasner, John “Jack” O’Neill, and Michael Untermeyer — tried to put their best feet forward with a room filled with engaged voters at the forum, which was broadcast live on 900 AM WURD.

Two candidates — Democrat Rich Negrin and Republican Beth Grossman — were unable to attend due to illness (Negrin) and a prior commitment (Grossman). Clark Deni, Untermeyer, Krasner and El-Shabazz were also gone by the end of the forum.

Moderators Holly Otterbein of Philadelphia Magazine and Vincent Thompson, host of 900AM WURD’s “City Council Live” and members of the Philadelphia Coalition for a Just District Attorney steered the discussion that focused on some pretty weighty criminal justice issues.

For the most part, the candidates agreed on things, even if they had different ways of getting to their common ground.

But that comity came to a rousing end when Wayne Jacobs of Ex-Offenders for Community Empowerment asked the remaining candidates what they would do about police brutality and the racially- biased application of stop and frisk.

Because it’s something he had already been doing, El-Shabazz said he wouldn’t have to change his tactics much.

“I call it a ‘stop and fish’ expedition because it occurs in poor, marginalized neighborhoods,” El-Shabazz said. “We can stop most of this by diversifying the DA’s office to include people who have those experiences. When I’m the next DA, we’re going to look at police reports and if we find patterns with certain officers, we’re going to keep statistics and we’re not going to charge those cases.”

Krasner, however, felt that wasn’t good enough. He chided his three remaining opponents, all former District Attorneys, about their lack of action on issues of police malfeasance.

“Never have so many people who have known so little about what I’ve done spoken so much about what I’ve done,” he said. “From the time that I was in the office as a young assistant district attorney, I threw out cases, and not because my supervisor told me to. I did it because I had the experience and noticed the patterns. That’s the power and the discretion of the District Attorney’s office, and that’s why I’m running to go in there. Because I understand it, I’ve lived it and I’ve done something about it. I didn’t protest. I did it.”

O’Neill went one step further, pointing out that Krasner is the lone candidate for District Attorney that has never himself been a prosecutor.

“When we were in the DA’s office making reforms and doing the right things, Mr. Krasner was making a lot of money as a criminal defense attorney, sitting on the sidelines and complaining,” he said. “That doesn’t make you a reformer.”