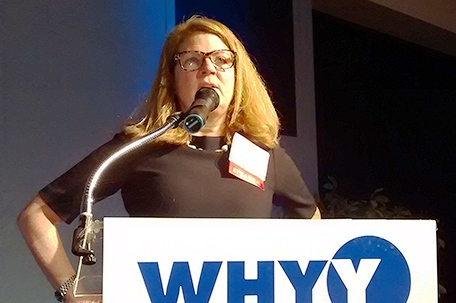 At the State of the Industry conference, Public Relations professionals got some insight into how to get their messages out.

Nearly 100 public relations professionals and students got tips from a variety of industry leaders on how better to do their jobs as communicators during the State of the Industry conference on April 19.

This is the third time that the three organizations have put on the State of the Industry event, said Meredith Avakian Hardaway, president of PPRA.

It’s a chance for three groups with similar missions to get together and share knowledge, Hardaway said.

“This took a lot of coordination,” she said. “[The partners] threw a lot of ideas for breakout sessions out there and we whittled them down into this group of topics.”

Probably the hottest topic in town is the Democratic National Convention (DNC), which comes to Philadelphia this summer. This year’s keynote speaker was April Mellody, Deputy CEO of Communications for the DNC. Mellody and her Chief of Staff Kyle Anderson took questions from the audience about the event and how attendees could get involved.

Mellody spoke about the preparations for the convention from the communications perspective ranging from press credentials, to talk back studios to how to connect delegates with their local news media.

One of the biggest communications challenges DNC officials face is that of creating the convention’s thematic message. That message is usually crafted around the party’s nominee.

Right now, Sen. Bernie Sanders and former Secretary of State Hillary Clinton are in a pitched battle for the nomination that may not even be over by the time the convention begins.

But while the nominee may not be confirmed, the consistency of the party’s values will make putting together the message easy, no matter who the standard bearer is, Mellody said.

“We may not know who the nominee is, but we do know what the values of the party are,” she said. “The nominee will have a lot to say in terms of messaging, but we can talk about the differences between the two parties and I’ve said many times that there’s no better place to showcase those values than in Philadelphia.”

Questions on how to make the convention an event where the community can feel connected were also asked. There are going to be several public events including caucus meetings and PoliticalFest, a carnival with a political theme, Mellody said.

While she has a staff that’s helping her put the communications apparatus for the DNC together, there’s a place for local communications volunteers, especially those who have helped out with things such as the Papal Visit, Mellody said.

“It’s not too late for local volunteers to get involved because we need local experts,” she said.

After Mellody’s talk, attendees stuck around to network and share their thoughts about the day’s workshops and what they learned from them.

That kind of activity made State of the Industry a success, said Vincent Thompson, president of PBPRS.

“I’m happy with the results,” he said. “We had really informative panels and I’m happy with the turnout and the diversity of the crowd and panels. I hope that people left with a lot of things that they can use in their careers.”