The Malcolm Jenkins Foundation, PepsiCo and Feed the Children joined forces last Friday at Xfinity Live! in South Philadelphia for “Get Ready Fest: Feeding Philadelphia.” The event is an effort to fight hunger and help Philadelphia families in need.

Two-time Super Bowl winning champion and Philadelphia Eagles safety Malcolm Jenkins is no stranger to giving back. The Malcolm Jenkins Foundation’s mission is to help underserved youth and communities through mentorship and programs that encourage education, character development, leadership, health, recreation and life skills. According to the 2018 “State of the City” report, Philadelphia’s poverty rate is currently at 26 percent, with half of its residents living in extreme poverty. Jenkins was on site at the event and expressed the significance of the “Get Ready Fest”.

Jenkins, originally from East Orange, New Jersey, has been doing his part to give back not only in Philadelphia, but also throughout the country. He spoke about some of the work he’s done with “Get Ready Fest” so far. 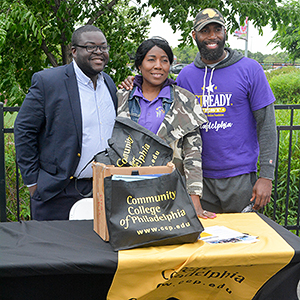 Gwendolyn and Malcolm Jenkins with a representative from Community College of Philadelphia at Get Ready Fest. (Photo: K-Len Anderson)

“We usually bounce around so we’ve done two in different areas of North Philly and this is the first one in South Philly.” Jenkins said, “We were in Camden yesterday. We’ve also done these in Columbus, Ohio. It’s a traveling program, [so] we like to move it around to different communities and make sure that we can serve as many people as we can.”

“[When] I first got here (Philadelphia) in 2014, we had been doing a lot of work in New Orleans and in New Jersey, where I’m from,” he said. “We were trying to figure out what we could do in Philly that could be impactful and we came up with “Get Ready Fest”. We hosted it in North Philly in 2014. We fed children with PepsiCo and we’ve been doing it every since then. It’s an opportunity for us to not only feed families, we are serving 800 families today, but also to bring resources from the community directly to these families that are in need and it’s been great. The support we’ve gotten from volunteers and community groups consistently showing up regardless of the weather has been awesome and it’s families that need it. This won’t save and change everything, but it definitely provides some relief and hopefully the resources that they need for the time being.”

To find out ways to support Get Ready Fest and The Malcolm Jenkins Foundation visit http://themalcolmjenkinsfoundation.org/. The site offers a schedule of all upcoming events, and people can register to be volunteers. Join the email list and donate to support the cause of your choice.